Sign in / Register
HomeInstrumentationsOrchestra + soloSCHUBERT - STARR; Fantasy in C Major, D. 934; for flute solo and string orchestra (an orchestral arrangement by Mark Starr of Schubert’s work for violin and piano) Part 1 of 3

SCHUBERT - STARR; Fantasy in C Major, D. 934; for flute solo and string orchestra (an orchestral arrangement by Mark Starr of Schubert’s work for violin and piano) Part 1 of 3

By: Franz Schubert
For: Orchestra + solo Flute
This music is in your basket
View basket
Loading... 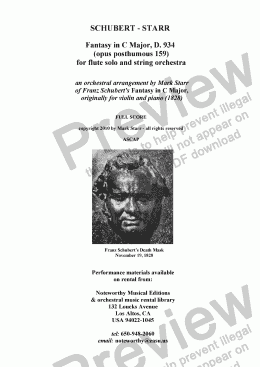 SCHUBERT - STARR; Fantasy in C Major, D. 934; for flute solo and string orchestra (an orchestral arrangement by Mark Starr of Schubert’s work for violin and piano) Part 1 of 3

To the eternal regret of flutists, Franz Schubert never composed a flute concerto. However, he did compose a magnificent set of variations for flute and piano, based on his song "Die Trockne Blumen," It is one of the most technically demanding and artistically challenging works for flute and piano in the Late Classical period. These flute/piano variations demonstrate that Schubert viewed the flute as a virtuoso solo instrument on a par with the violin. One wonders: if Schubert had lived past age 31 (he died two years younger than Mozart), would he have composed a flute concerto?

This arrangement for flute solo and string orchestra of Schubert’s Fantasy in C Major (originally composed for violin and piano, D. 934) is my attempt to fill in that glaring gap in the flute concert repertoire, thus making this extraordinary work available to concert flutists who appear as soloist with orchestras. While not quite a concerto, the Fantasy in C major is a large-scale virtuoso work in seven continuous sections that correspond roughly to three connected movements. Without repeats, the work lasts 22 minutes. With the optional repeats, the duration is roughly 27 minutes.

Composed in 1828 during Schubert’s last few months of life (as his health deteriorated from the severe case of syphillis that would soon kill him,) the Fantasy is not only Schubert’s greatest work for violin and piano – it is also one of his supreme instrumental masterpieces. It is my contention that Schubert conceived the Fantasy in C major as a work for violin solo and orchestra; but his deteriorating health forced him to set the music down quickly on paper for violin and piano. In 1828, faced with the looming prospect of impending doom from syphilis, Schubert was obsessively determined to leave for posterity at least some of the wealth of music that was still within him, in the limited time that he had left. The result was perhaps the greatest burst creative energy in musical history. In less than one year, Schubert produced a steady stream of masterpieces in many genres - up until the final sketches for his tenth symphony.

The Fantasy was never performed in Schubert’s lifetime, and it was published posthumously. The piano part is symphonic in texture and full of orchestral effects - beginning with the breath-taking, almost inaudible tremolo that opens the work.

Besides the full score of the Fantasy for flute solo and string orchestra, a separate part for flute in solo is also available for purchase and downloading on sibeliusmusic.com. I have left Schubert’s solo part intact. However, I have made many editorial modifications – principally in the form of changes in dynamics, to make the solo part clearly audible against the orchestral texture. I have also added fragments of the part for the first violins into the pauses in the flute solo part, thus enabling the solo flutist to join the orchestra for the tutti sections. This practice allows a flute soloist to optionally to conduct the work from the flute. The solo and tutti sections are clearly marked.

I hope browsers of this score (and listeners to the demo performances) will express their opinions of Schubert’s Fantasy in C Major, D. 934, and my orchestral arrangement of it - either in an online review or in an email to me. I am always interested in reading the observations of those who examine and listen to my compositions and orchestrations. To send me an email, just click on the button marked EMAIL THE PUBLISHER.

SCHUBERT - STARR; Fantasy in C Major, D. 934; for flute solo and string orchestra (an orchestral arrangement by Mark Starr of Schubert’s work for violin and piano) Part 2 of 3

Reviews of SCHUBERT - STARR; Fantasy in C Major, D. 934; for flute solo and string orchestra (an orchestral arrangement by Mark Starr of Schubert’s work for violin and piano) Part 1 of 3