By: Mark Starr
For: Solo instrument (Honky-tonk Piano)
This music is in your basket
View basket
Loading... 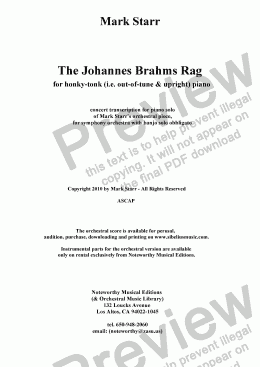 Composer
Mark Starr
Year of composition
2010
Publisher
Noteworthy Musical Editions
Difficulty
Difficult (Grades 7+)
Duration
4 minutes
Genre
Classical music
License details
For anything not permitted by the above licence then you should contact the publisher first to obtain permission.

In 1933, Robert Haven Schauffler – an Austrian-born American author, cellist, music critic and soldier – published a biographical sketch of Johannes Brahms entitled "The Unknown Brahms." Schauffler’s book was based in part on his interviews with, and correspondence from, musical personalities who knew Brahms. One section of the book documents Brahms’ encounter with the banjo, and with ragtime music. Schauffler quotes Arthur Abell, an American violinist and the author of "Talking with Composers" – a book in which Abell interviewed Brahms and many other major composers. In addition to Brahms, the encounter in the 1890s involved the composer’s friend, cellist Julius Klengl, and one of Klengel’s cello students – a young American woman identified elsewhere only as Mary X.

Mr. Arthur M. Abell, an American violinist, was one of the few who could make the Master talk intimately about his own work.

"A year before Brahms died," said Mr. Abell, "he asked me whether I played the banjo."

"Because at Klengel’s I met an American girl who played for me on that curious instrument a sort of music which she called Ragtime. Do you know this?"

And he hummed the well known tune which goes to the words:

If you refuse me, Honey, you’ll lose me.

"Well," the Master continued, with a far-away look in his eyes, "I thought I would use, not the stupid tunes, but the interesting rhythms of this Ragtime. But I do not know whether I shall ever get around to it."

One of Brahms’ biographers – the German author and critic Max Kalback – also documented this meeting between Brahms, Klengl and the banjo-playing Mary X, in his 8-volume study of Brahms’ life and music. Klengel told the story to Kalback, who wrote about it in his biography. Klengel placed the encounter in January 1895. Albel said to Schlauffer that he (Abell) spoke with Brahms "a year before Brahms died." Brahms died in April 1897. Brahms did not indicate to Abell the year in which he met the American girl who played the banjo for him.

There is no conflict in dates here. The encounter must have occurred somewhere in the period of 1895-1896.

[Brahms was a dinner guest at Klengel’s home, and the cello student Mary X was also present.]

"After dinner, Klengel directed his student to fetch her banjo, an instrument Brahms had never heard of. Of African origins, it was introduced to America by the Negroes. The Negro accompanies his songs and dances with banjo, and Miss Mary found the opportunity to learn the skill from the source. Brahms was astonished to find the primitive instrument so versatile and expressive. He examined it carefully and remarked in the course of conversation that he now understood where friend Dvorak had gotten the melodies of his American compositions."

The two lines of music that Brahms hummed to Abell (the notes that go to the words ’If you refuse me, Honey, you’ll lose me’) belong to the song Hello Ma Baby!. This song, by Howard & Emerson, was first published in 1899 by T. B. Harms Co. in New York. At first glance, that date (at least a year-and-a-half after Brahms’ death) might call into question whether the notes that Brahms hummed to Abel were in fact notes from Hello Ma Baby!

Here again, there is really no conflict in dates. The date of publication in New York may have been years after the song was written and made popular in vaudeville and in traveling minstrel shows (both of which were at their height in the 1890s.) Joe E. Howards was a popular vaudeville performer long before he wrote Hello Ma Baby.

One cannot help but wonder: what sort of ragtime piece might Brahms have come up with if he had not died a year after talking with Abell – and if he had gotten around to fulfilling his initial intention. What might such a ragtime piece have sounded like?

If Johannes Brahms had composed a ragtime work, that might have legitimized ragtime in the eyes (and ears) of the musical elite at the turn-of-the-century. Such a ragtime piece might well have changed the course of music history, making early jazz international, and not strictly American.

And who knows?, had Brahms composed a ragtime work, today we might all be singin’ Die Blauen.

To answer the provocative question "What might a ragtime piece by Johannes Brahms have sounded like?," I have composed a speculative work entitled "The Johannes Brahms Rag."

In addition to this piano piece, I have posted on sibeliusmusic.com my arrangement of the same piece for symphony orchestra, with banjo solo obbligato.