By: B. R. Whitlow
For: Large mixed ensemble
This music is in your basket
View basket
Loading... 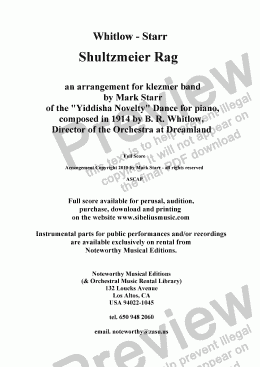 By: B. R. Whitlow
For: Large mixed ensemble

Composer
B. R. Whitlow
Year of composition
1914
Arranger
Mark Starr
Publisher
Noteworthy Musical Editions
Difficulty
Moderate (Grades 4-6)
Duration
4 minutes
Genre
World music
License details
For anything not permitted by the above licence then you should contact the publisher first to obtain permission.

The Shultzmeier Rag is a remarkable fusion of two cultures from 1914. It is a combination klezmer/ragtime dance. Originally published for piano solo, I have arranged it for klezmer band.

The combination of these two disparate styles of music into one infectiously catchy dance becomes more comprehensible after one exhumes its provenance. B. R. Whitlow, composer of the Shultzmeier Rag, was musical director of the orchestra at Dreamland.

And where was Dreamland? At Coney Island in Brooklyn, New York. Built in 1904 for $2,500,000 (plus another $500,000 for the land,) Dreamland was the most colossal, stupendous, amazing, incredible amusement park that the US – and possibly the world – had ever seen.

Brooklyn is New York's largest and most populous borough. At the beginning of the 20th Century, it held the largest community of Jews in the US, roughly 1,000,000. Thus, it was not merely natural but inevitable that the American musical tradition of ragtime (which was at its peak in the first decade of the 20th Century) should fuse with klezmer traditions of Jewish music, transported from Eastern Europe by countless waves of immigrants who passed through Ellis Island. And where else should they meet - but at Dreamland in Coney Island!

However, there is tragic footnote attached to the Shultzmeier Rag. When Whitlow's dance was published in 1914, he was undoubtedly no longer employed as director of the orchestra at Dreamland. In fact, Dreamland no longer existed. On the morning of May 27, 1911, in one of the worst conflagrations in US history, Dreamland burned to the ground.