By: Kela Bela
For: Quintet of Clarinets in Bb
This music is in your basket
View basket
Loading... 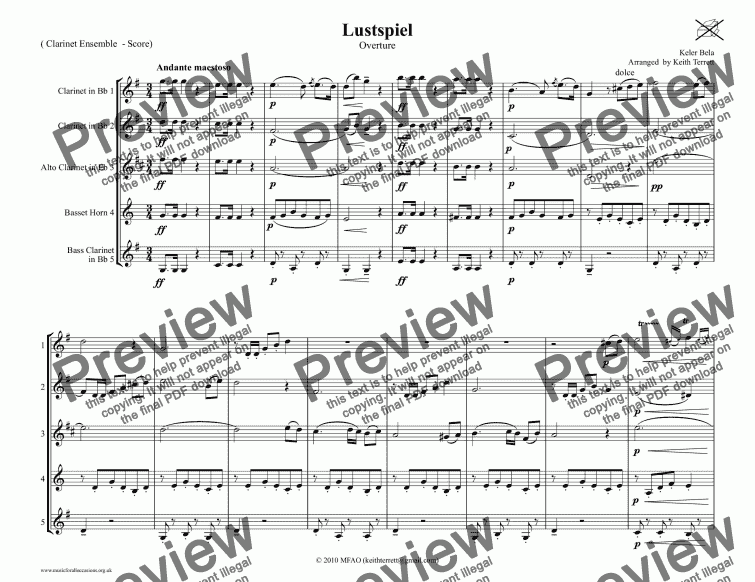 By: Kela Bela
For: Quintet of Clarinets in Bb

Composer
Kela Bela
Arranger
Keith Terrett
Publisher
Music for all Occasions
Difficulty
Moderate (Grades 4-6)
Duration
5 minutes
Genre
Classical music
License details
For anything not permitted by the above licence then you should contact the publisher first to obtain permission.

Bespoke arrangements are available, e-mail me your requirements:keithterrett@gmail.com

Kela Bela (1820-1882), came to England in 1874, and again in 1875, touring and conducting concerts of his music. Lustpiel, also known as his comedy overture became a firm favourite in Victorian England.

Lustspiel was composed by the Hungarian/Czech composer/conductor Keler-Bela who was born in 1820 and died in 1882. The word Lustspiel means "comedy" in German. The composer, known mainly for his waltzes traveled from Germany in 1874 to tour in England in 1875. This piece was a major part of his orchestra’s repertoire during his 1875 concert tour.

Presently, the only part of the work that is still performed is the Overture, usually for Concert Band.

Mr. Terrett has done an exemplary job of ensuring the spirit of the music is intact for the Clarinet Quintet version. There is life and joy in the music and fun to perform as well as listen to.

For advanced performers about 7 minutes in length.