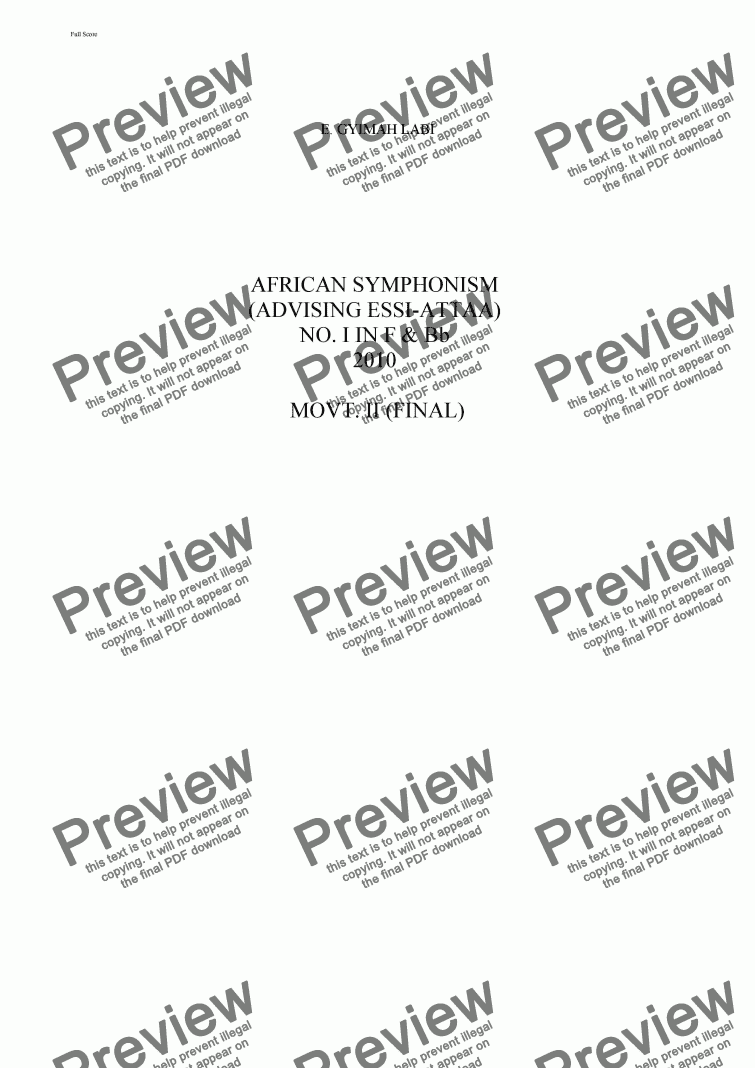 Composer
E. Gyimah Labi
Year of composition
2010
Difficulty
Difficult (Grades 7+)
Duration
10 minutes
Genre
Modern classical music
License details
For anything not permitted by the above licence then you should contact the publisher first to obtain permission.

Brief outline of the Second Movement ofnAfrican Symphonicism, NO. 1nnWhile the first movement dealt with melodic inventions, this second movement concerns itself with motivic inventions. The movement divides into two parts - each part preceded by a 4 & 8-measure church-bell-like phrases.nnPART I (Mm. 1-259 = 259)nnThe first 4-measures church-bell-like phrase from Movt. I usher in the first part proper.nnFirst Introductory MaterialnMm. 5-13 = 9 mmnnThis essentially portrays the anapestic (short-long pulse set in 6/8 time) motive that is embedded in the main tune that is to follow.nnSecond Introductory Material n(Mm. 14-30 = 17 mm)nnnThe anapestic property is again present, betraying the source of the principal theme to follow - the source being one of the folk tunes of the fisher folks in Accra. The drag and pause motion of fishermen dragging their catch to shore.nnThird Introductory Material n(Mm. 31-38 = 8 mm)nnThe brasses present a remote variant of the anapestic motive in a step-wise descent motion, quartally structured to portray the traditional sound character. This plus its repetition (mm. 39-46 = 8 mm) assume antecedental function and smoothly emerges with its consequent (mm. 39-60 = 22 mm). The asymmetric relationship between the antecedent and its consequent is the fact that the consequent has been dramatically extended to usher in principal theme. The presence of the anapestic property throughout this introductory section unifies it with the principal theme that follows. The n ��../2nprogrammatic dimension of this adapted tune is as follows:nnA young lady is condemned for failing to assist her husband directly with his profession: She marries a fisherman, but cannot go fishing. She marries a farmer, but cannot go farming. She marries a hunter but cannot go hunting. She just wants to be a lady - hence the condemnation. Her outlook might improve if she would combine the secular and the sacred life styles or perhaps it is rather the husband who needs enlightenment.nnPrincipal Theme Proper n(Mm. 61-87 = 27 mm.)nnThree basic layers are discernible. The arpeggiated figure in Violin I and upper woodwind, the main tune projected by the inner strings and inner woodwinds and the third being the holding tones by the brasses. This section is solidly founded in the principal key area of Bb.nnSolemn Interpolationnn(Mm. 88-97 = 10 mm.)nnThis sequential projection is stated in the strings. It is somewhat dissimilar to the anapestic motive and functions as a long structural up-beat to the yet another anapestic motivic derivative that follows.nnSecond Motivic Workoutn(Mm. 98-122 = 25 mm)nnThe metric foot here consists of tribrach or choree cells (short-short-short) cellular sequential projections. It assumes a rocket trajectory that leads to the third motivic/melodic utterance. The root pedals provide the necessary buoyancy for the parallel octave tribrachic projections. nnThird motivic workout n(Mm. 123-140 = 18 mm.)nnHere, a rather charming melodic utterance emerges that, from the programmatic perspective, testify to the glory entailed in matrimony when understanding prevails.nn ��../3nnMm. 141-259 = 119nnThis is essentially, a variant repetition of the preceding principal theme, the solemn interpolation as well as the 2nd and 3rd motivic workouts that also round off the first part.nnPART II (Mm. 260-471)nnThe woodwinds, timpani and percussion intone the church-bell-like passage again (mm. 260-268 = 8 mm.) to usher in Part II proper.nnMm. 269-292 = 23 mm.n(Antecedent)nnThis segment displays a fourth motivic invention. The strings, supported by the bassoons present an aborted contrapuntal activity. It assumes antecedental function. nn(Mm. 280-292 = 13 mm.)n(Consequent)nnIts consequential balance depicts the 16th-note partially running bass figuration, the 16th-note partially running decorative figuration in the woodwinds, with the melodic activity in-between.nn(Mm. 292-295 = 4)nAntecedental)nnAnother conversation ensues. The woodwinds pose the brief question. This is posed in the key of unconfirmed Ab and modulates to the relative minor key of f.nn(Mm. 296-312 = 16 mm)n(Consequential)nnThe trumpets state the melody, while the horns provide the backgound atmosphere. The basses provide a memorable counter-melody. Here, again, the answer is stated in Ab that modulates to the relative minor of f. The n ��../4npattern is repeated in Eb and eventually modulates to its relative minor of c.nMm. 312-333 = 22nnThe conversation continues in the woodwinds, supported by the upper strings that provide the background figuration. The sentiment is essentially in the minor mode.nnMm. 334-342 = 9 mm.nnThe strings, trumpets, lower woodwinds, in a descending sequential trajectory, present an interpolatory material that prepares the entry of another passionate momentnnMm. 343-370 = 28 mm.nnThe previous Ab major sentiment now becomes an Ab minor sentiment that emphasizes its relative major as well. This unresolved dilemma quickly shifts to V of Bb (m. 349), with the dominant tone emphasized by the addition of its tritone and flatted 7th. This pattern is twice repeated before giving way to the essential principal theme that progresses to the end of the section (m. 370). The defiant chirps in the piccolos and basses add to the drama and charm of the section.n With a 2-measure clarion call (tutti - mm. 372-373) our attention is drawn to a sacred atmosphere once again by the strings.nnMm. 373-410 = 38 mmnnThe strings present this solemn rendition (Mm. 373-386 = 14 mm) that is immediately repeated by the entire ensemble. The passage is then intensified via eight-note attack points (mm. 387-410 = 24 mm). The strings then offer a diversionary solemn pizzicato passage that leads to a 3-measure tribrachic passage intensified via parallel octave figuration (mm. 415-417).nnMm. 418-434 = 17 mm)nnA final motivic invention is presented - again from the perspective of the singing mannerism of the Anglo Eves. A modal scale passage starting on C leads to its repetition starting on F. The inner quartal activity and its n ��../5nrepetition are set a tritone apart. A rather jarring effect is produced, though, just for the brief moment as the inner quartal rendition preserve their integrity. The percussion battery here take the edge off the dissonance as they offer an alternative charm in drumming.nnMm. 435-471 = 37 mmnnThis segment closes the piece in the predominantly pleasant sonority. From another perspective, the Bb ending of the first movement and the F major ending of the second are not considered antagonistic tonal areas and so require no reconciliation. The work is triumphantly cadenced.nnE. Gyimah LabinSeattle, WA, USAnSeptember 2010nnnn