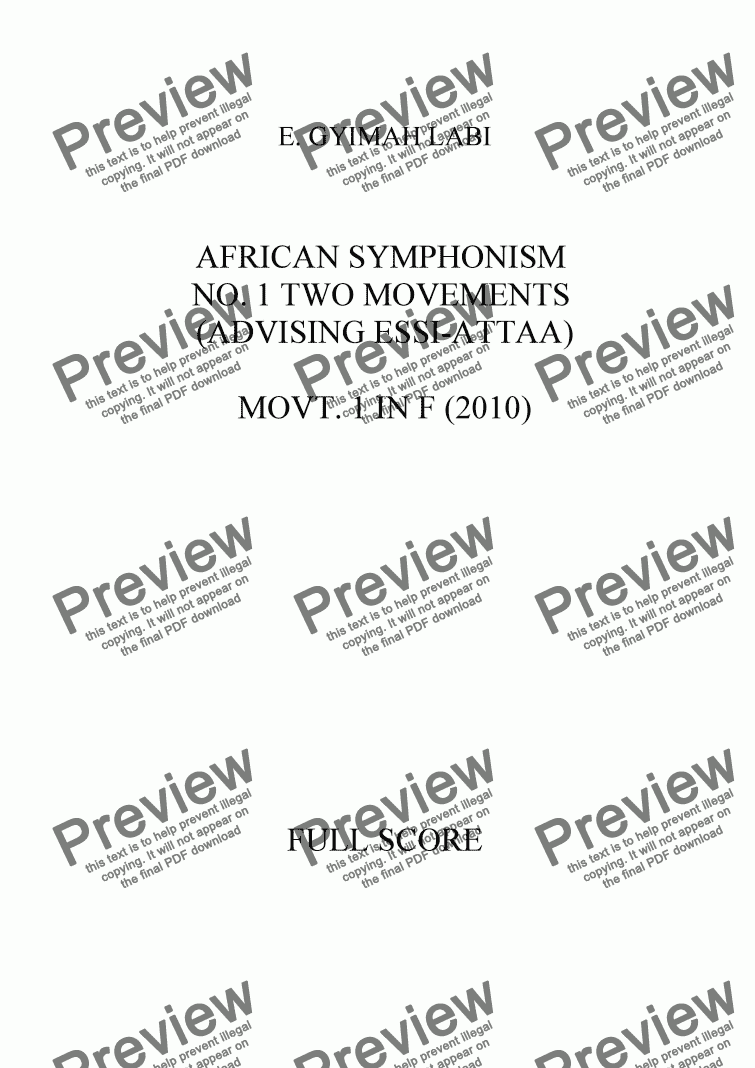 Composer
E. Gyimah Labi
Year of composition
2010
Difficulty
Difficult (Grades 7+)
Duration
18 minutes
Genre
Modern classical music
License details
For anything not permitted by the above licence then you should contact the publisher first to obtain permission.

The brief structural outline is intended to facilitate the activities of any future scholars who may be interested in a more detailed analysis of this work.

African Symphonism, Movt. I owes its subtitled �Essi-Attaa� to a folk tune that has remained with me from infancy. Its words are:

�Essi-Attaa, Ama-Attaa, a young lady who does not heed to the council of elders, ends up in the asylum.�

The essential nature of the introductory section is a dialogue between the clarinets and trumpets on one side and the oboes and horns on the other. Spliced between this conversation are moments of delicate and other times robust orchestral interjections into the conversation. The rest of the orchestra is engaged in providing a warm and lush background of sound within which the conversations are set. The unique dimension of this background sound is that it is essentially the principal theme in augmentation.

Measure 93 to 100 sets the tempo and dance-like character of the principal theme proper ��../2 that follows. Mm. 101 - 132 (32 mm) constitutes the initial statement of the principal theme proper in the tonic key of F. The bass figuration provides the dance-like beats of the section. The counter-melody stated by the horns and the two lower trumpets create the charm of the section. Its character is actually rooted in the layout of the African percussion ensemble which depicts three basic features. First, the time-line, the line to which all the other parts pay attention to, so as to stay together in the absence of a conductor. This is usually articulated by some idiophonic instrument, such as the bell. The second feature is the intermediate supporting instruments that add density to the sound structure. The third is the master drum part - soloistic in nature. The Counter-melody then assumes the function of the time-line in the traditional African percussion ensemble and therefore adds to the dance-like and metronomic nature of the section. A re-statement of the principal theme occurs at mm. 133-164 - (32 mm) in the relative minor key of d. Mm. 180-186 (7 mm) is the motivic work out, stated in the tonic key of F that brings the section to a cadential pause.

This portion constitutes the consequent of the Second Principal Theme. It is stated by the strings and lower woodwinds in the key of Bb. It�s asymmetrical relationship (46 + 11) is due to the fact that the antecedent was essentially repeated 8-measure phrases.

The entire orchestra (tutti) engage in this rendition that is characterized by running parallel octaves.

The 12-measure Third Principal Theme owes its charm to the counterpoint that exists between the lower woodwinds and Violin II on one hand and the upper woodwinds, lower Trumpets and Violin I on the other. The basses support the contrapuntal activity with their 2-measure speech-like utterances. Piccolos, flutes and upper trumpets provide fanfare calls that add to the drama in this energy-charged section. The Ab cadence in m. 294 abruptly shifts to Bb tonal area again with a repetition at m. 307. While the preceding Principal Themes seam to suggest popular music as the source, the 4th Principal Theme is firmly rooted in sacred music. So, �Essi-Attaa� is being advised to balance the popular life with the sacred. Three interpolations precede the Sacred 4th Principal Theme. These are located at

This sacred rendition of Int. IVA now abruptly gives way to, this time, a passage with traditional/folk music as its roots. It is in aba format (Mm. 335-357; 358-366; and 367-386). This rootless, pseudo-quartal segment enabled the tonality of D to be established in Int. IVC

The 5th Principal Section that is to follow is also preceded by its interpolatory figure or its bridge.

This is a little lovely tune, �giocoso-like,� the phrases of which repeat for a short while to prepare the entry of the next contrapuntal segment. Its explosive scale passages are memorable.

The ensuing cadencial portion (mm. 641 - 655 = 15 mm) in the strings enable all the pent-up emotions to be dissipated before the rendition of the final 6th principal ��../5 section.

As structured, the 6th interpolation prepares the entry of the Sixth Principal Section. It is rooted in the quartal singing mannerisms of the Anglo-Ewes of the Ghana/Togo traditional areas. The basic chord consists of two superimposed 4ths - resulting in the availability of the tonic, fourth, fifth, and the lowered 7th. The interest in this segment then would be in its rhythmic drive within the quartal atmosphere.

This section subdivide as: mm. 686 - 694 = 9 mm - antecedental in function and mm. 695 - 737 = 43 mm. - consequential in function. The section as a whole is the final Principal Section before the entry of the recapitulation section. The asymmetric relationship between the antecedent and its consequent is evident. The strings state the antecedent with the woodwind following immediately after with its lovely turns that bob through the keys. After a while, it settles on V of F.

Before the recapitulation section is ushered in, the two introductory segments that preceded it in the exposition section manifest one more time. First, the bombastic passage from mm. 79 - 88 in, essentially, parallel octaves, is stated. Then the 4-measure figure from mm. 89 - 92 that creates a church-like atmosphere follows as was the case in the exposition but this time its been expanded into an 8-measure figure via sequential modulation.

The basic themes of the recapitulation manifest as follows:

This essentially introduces the First Principal Theme as was the case in the exposition.

Antecedental in function, set in F

Consequential in function, set in the parallel minor of f.

Antecedental in function, set in F

Antecedent + Consequent, set in the relative minor key of d

Antecedent + Consequent, set in the parallel major key of D

This second part of the basic theme is now repeated in the main tonic key of F.

This is essentially the motivic work-out of the main motive of the principal theme. Throughout this recapitulation, the counter-melody stated by the horns and the two lower trumpets create the charm of the section.

The Coda is an abbreviated version of the main introductory passage. The basses now join in the conversation. This continues, measure by measure, to its dramatic conclusion.