By: Ahn Eak-Tai
For: Brass quintet
This music is in your basket
View basket
Loading... 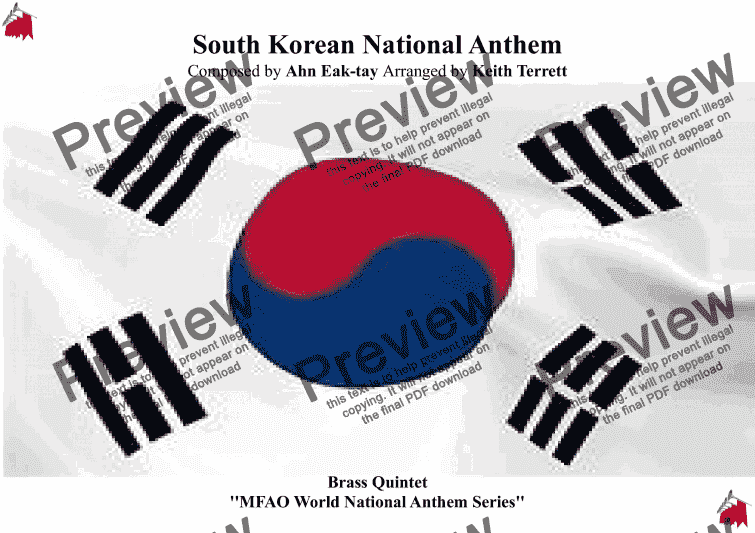 By: Ahn Eak-Tai
For: Brass quintet

Composer
Ahn Eak-Tai
Year of composition
1935
Arranger
Keith Terrett
Year of arrangement
2014
Publisher
Music for all Occasions
Difficulty
Easy (Grades 1-3)
Duration
1 minute
Genre
Classical music
License details
For anything not permitted by the above licence then you should contact the publisher first to obtain permission.

The South Korean national anthem arranged for classical brass quintet. There are versions in store for String Orchestra & full Orchestra.

The national anthem of the Republic of South Korea is entitled ’’Aegukga’’. The title means ’’The song of Love for our Country’’. It is generally believed that the words were written at the end of the 19th century, either by the politician Yun Chi-Ho(1865-19460,or by the teacher and leader of independence movement An Chang-Ho (1878-19380. The words were originally chanted to the melody of the Scottish folk song ’’Auld Lang Syne’’. A new melody was composed in 1935 by Ahn Eak-Tai, who lived in Spain for a long time. ’’Aegukga’’ has been the official national anthem since 1948, the year of the foundation of the Korean Republic.

It is believed that the lyrics of "Aegukga" were written for the cornerstone-laying ceremony of the Independence Gate in Seoul in 1896 by Yun Chi-ho, a politician, or by An Chang-ho, a pro-independence leader and educator.[1] Initially, "Aegukga" was sung to the tune of the Scottish folk song "Auld Lang Syne", introduced to Korea by Western missionaries. The Provisional Government of the Republic of Korea (1919–1945) in Shanghai, China, adopted it as their national anthem. At a ceremony celebrating the founding of South Korea on 15 August 1948, the Scottish tune was finally replaced by the Finale of Korea Fantasia that Ahn Eak-tai had composed in 1935. The new "Aegukga" was later adopted by the Presidential Decree of 1948 by then-South Korean President Syngman Rhee (or Lee Seungman).

If you are hosting a sporting event and need arrangements of any national anthem, kindly consider me first: keithterrett@gmail.com