By: Phra Chen-Duriyang
For: Brass quintet
This music is in your basket
View basket
Loading... 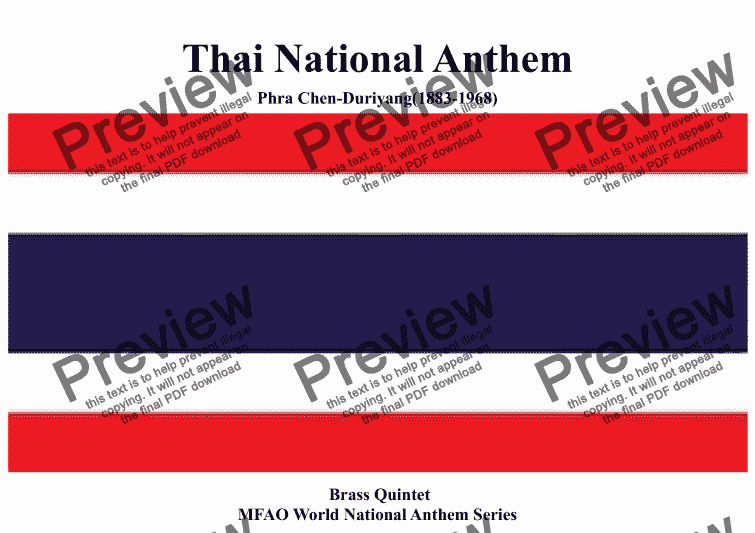 By: Phra Chen-Duriyang
For: Brass quintet

Composer
Phra Chen-Duriyang
Arranger
Keith Terrett
Publisher
Music for all Occasions
Difficulty
Easy (Grades 1-3)
Duration
1 minute
Genre
World music
License details
For anything not permitted by the above licence then you should contact the publisher first to obtain permission.

The anthem was composed a few days after the 1932 coup in the tune vaguely similar to the national anthem of Poland, Poland Is Not Yet Lost, and was first broadcast in July 1932. The original lyrics were by Khun Wichitmatra.

Before 1932, Phleng Sansoen Phra Barami (the Royal Anthem) was used as the national anthem of Siam.

In 1934, Thai government launched competitions for the official national anthem, for both melody and lyrics. Jangwang Tua Patayakosol composed a tune in a traditional style called "Phleng Maha Nimit", but Phra Jenduriyang’s melody was selected because it sounded more modern. After that, in the competition for the lyrics with Phra Jenduriyang’s music, the original words by Khun Wichitmatra took first prize and are still used as the official lyrics with, however, a minor edit and an additional version written by second prize winner Chan Khamvilai.

In 1939, when the name of the country was changed from Siam to Thailand, a competition was launched to create new lyrics, with those by Luang Saranuprapan winning. Prime minister Phibunsongkhram ordered the anthem to be played every day at 08:00 and 18:00, and ordering the populace to stand up to show respect for the nation. That law is still in force today.