Come Back To Sorrento for Bb Trumpet & Piano

By: Ernesto Di Curtis
For: Solo Trumpet in Bb + piano
This music is in your basket
View basket
Loading... 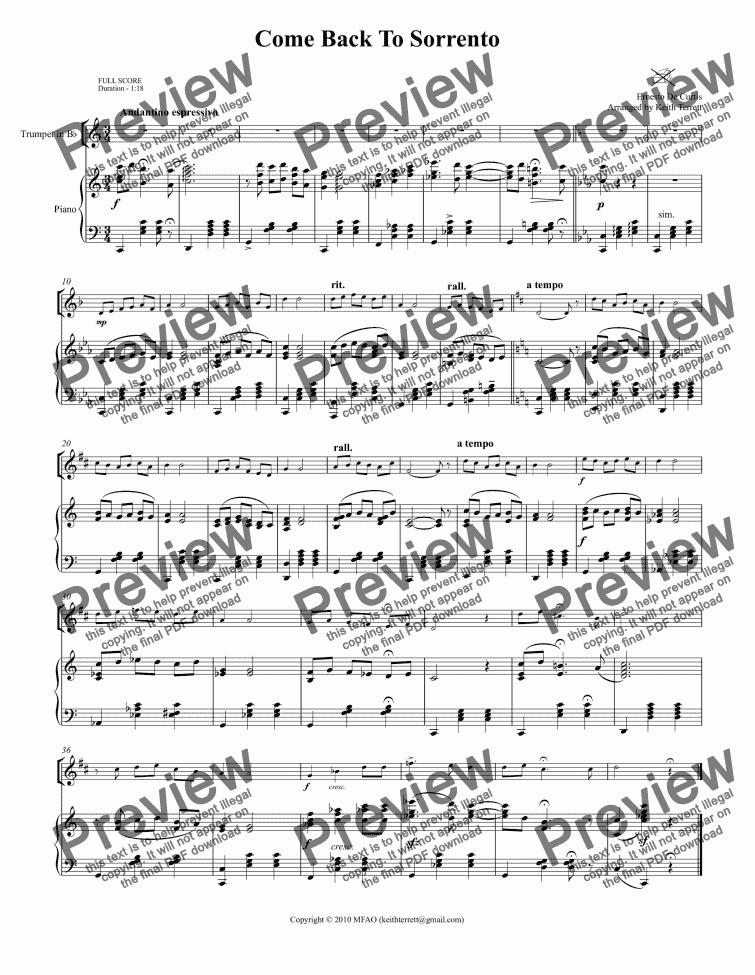 Come Back To Sorrento for Bb Trumpet & Piano

By: Ernesto Di Curtis
For: Solo Trumpet in Bb + piano

Composer
Ernesto Di Curtis
Year of composition
1902
Arranger
Keith Terrett
Publisher
Music for all Occasions
Difficulty
Moderate (Grades 4-6)
Duration
2 minutes
Genre
Classical music
License details
For anything not permitted by the above licence then you should contact the publisher first to obtain permission.

Come Back To Sorrento arranged for Bb Trumpet & Piano.

’’Torna a Surrient’’ is a Neapolitan song said to have been composed in 1902 by Ernesto De Curtis to words by his brother, Giambattista. The song was copyrighted officially in 1905; it has since become wildly popular, and has been sung by performers as diverse as Beniamino Gigli, Elvis Presley, Dean Martin, José Carreras, Plácido Domingo, Luciano Pavarotti, Meat Loaf, Mario Lanza, Franco Corelli, Robertino Loretti, Giuseppe Di Stefano, and Francesco Albanese.

Claude Aveling wrote the English lyrics, which are titled. Come Back to Sorrento. Doc Pomus and Mort Shuman re-arranged it and wrote a new set of lyrics for Elvis Presley Surrender.

Ernesto De Curtis was an Italian composer. Born in Naples, the son of Giuseppe De Curtis and Elisabetta Minnon, he was a great-grandson of composer Saverio Mercadante and the brother of poet Giambattista .

Reviews of Come Back To Sorrento for Bb Trumpet & Piano