By: Rob Howe
For: Orchestra + solo Piano
This music is in your basket
View basket
Loading... 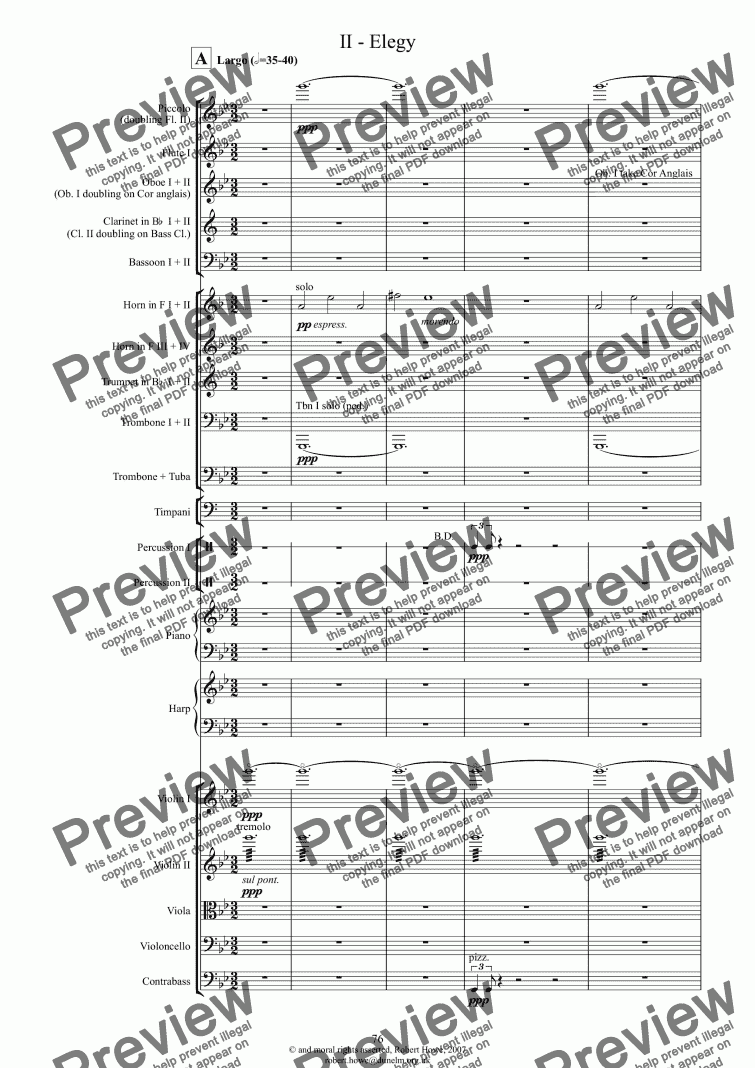 Composer
Rob Howe
Year of composition
2007
Difficulty
Difficult (Grades 7+)
Duration
6 minutes
Genre
Modern classical music
License details
For anything not permitted by the above licence then you should contact the publisher first to obtain permission.

[An amateur premier performance of this work took place in 2013. Please bear with the quality… The "MP3 File" button at on this ScoreExchange site is a midi-performance, which captures all the correct notes, if not as much spirit. The amateur recording is here: https://soundcloud.com/rob-howe-6/concerto-in-c-complete]

The Piano Concerto in C was written in 2007 as a gift for a friend. The intent in it was to produce something with tight structure, complex motivic interrelations and other semi-learned devices, but dressing the outer surface in a style which is immediately accessible. I am concerned for the future of classical music, which seems to be set on alienating itself from a wider audience, while its own more specialised audience dwindles. I am inspired by the approach of someone like Haydn who took great pains to pursue the ideal of ‘art concealing art’, with the sub-surface complexity and inner logic and coherence of the music there for whoever looks for it, without that understanding being necessary to enjoy the music. The music makes use of a Romanian folk-scale and is generally in a style not a million miles away from Ravel, Martinů, Bartók in his sunnier moods, Sibelius and several film-music composers. Please don’t feel the need to read the paragraphs on the individual movements if you don’t want to… the music should be able to carry itself ideally. But the notes are there if you’re interested.”

The first movement is based around a traditional sonata form. It begins with the main theme, with a dash of character given it from a Romanian folk mode (something along the lines of C-Eb-E-F#-G-A-Bb-C). The melodic shape of the main theme is used in all three movements for their primary material, and the movement C-G-C which begins it is mirrored in the keys for the three movements (the first and last movements are basically in C major, and the second movement is in a G minor area). The theme is immediately repeated up a major third: the use of keys areas separated by a third is the source of the main harmonic movement in the work. After a a bit of playing with the theme and its re-statement the piano enters and leads to a short cadenza. This links to the slower-paced second subject area: although the second subject material is really just a variation of the accompaniment figure for the main theme and soon the motifs from the main theme are being used again. Things get into a bit of a reverie. The tempo picks up again shaking this away, and a development section ensues where the motifs are broken up and passed around. At the centre of this development section, and at the approximate centre of the movement as a whole, is the main cadenza for piano (appropriately enough the cadenza enters on E flats, a third away from the start and end of the movement key of C). The development picks up again and presently leads into an obvious re-statement of the main theme in C again. There is no second subject restatement (there wasn’t really a second subject anyway), and a coda gets underway. This leads to a majestic slow statement of the main theme in brass, but at the climax a loud discord interrupts everything. The strings wonder what to do next, playing with a scrap of the second subject. The orchestra rouses itself out of this and storms to a bright conclusion regardless.

The second movement is very slow, with the basic metric pulse deriving from the a stately baroque Sarabande dance. The opening horn calls (which appear to be based on the first movement’s main theme) are based a fifth away from the G minor area of the surrounding sound, starting on a D, and sound prominent B naturals which are out of place in the prevailing neighbourhood G minor which needs a B flat. The cor anglais delivers a longer, rather elegaic melody which is to be the main material for this movement, and this is punctuated by faltering beats sounded by the basses and bass drum. The melody is created from an outline of a rising third followed by some drooping appoggiaturas. It drifts off and we hear the horn calls again. The piano states the elegaic melody and then the lower strings conduct a short, somewhat tragic-spirited exploration of its shapes. The horn calls return, and the piano takes up the main theme in a major key a third away. This more positive attempt gives way and a kind of polyphonic fantasy for woodwind continues to explore the shapes of the melody. Eventually the bottled-up tension wells up and breaks: a large and dissonant canonic statement of the main theme bursts out, with those horn calls still ringing out and clashing against the underlying harmonies. The horn calls continue alone, spreading into woodwind, until a final crushing climax with the bass drum adding its faltering rhythms from the start. Suddenly the music collapses and returns to the stillness of the opening. A few scraps of the melody fail to make any progress, and the music fades away on a strange, foreign cluster in brass and a final gong stroke.

The last movement is much more straightforward and is in a simple ternary form with coda. It is a very quick moto perpetuo movement with a kind of tarantella rhythm. The main theme is a variant of the first movement theme, and the Romanian mode informs the melodic and harmonic shapes strongly again. Once things are underway properly, the theme gets stated on keys a third apart. A kind of second subject tune in longer notes is heard at one point. The middle section of the movement drops into an altered rhythm and uses the “second subject” as it’s main (unashamedly catchy) tune. It doesn’t last very long before the third section begins again, the same as the first section. Things rattle along as a sort of repeat of the first part, until the brass pick up the “second subject” tune and work it to a climax with the woodwinds playing scraps of the related “catchy tune” simultaneously. This climax runs its course and a brisk coda takes off and flings the concerto headlong towards its affirmative conclusion.

Sorry, there's no reviews of this score yet. Please .
In order to submit this score to ScoreExchange.com Rob Howe has declared that they own the copyright to this work in its entirety or that they have been granted permission from the copyright holder to use their work. If you believe that this score should be not available here because it infringes your or someone elses copyright, please report this score using the copyright abuse form.