Sign in / Register
HomeInstrumentationsOrchestraThe Ballade of Grosso the Goth

The Ballade of Grosso the Goth

By: Tony Matthews
For: Orchestra
This music is in your basket
View basket
Loading... 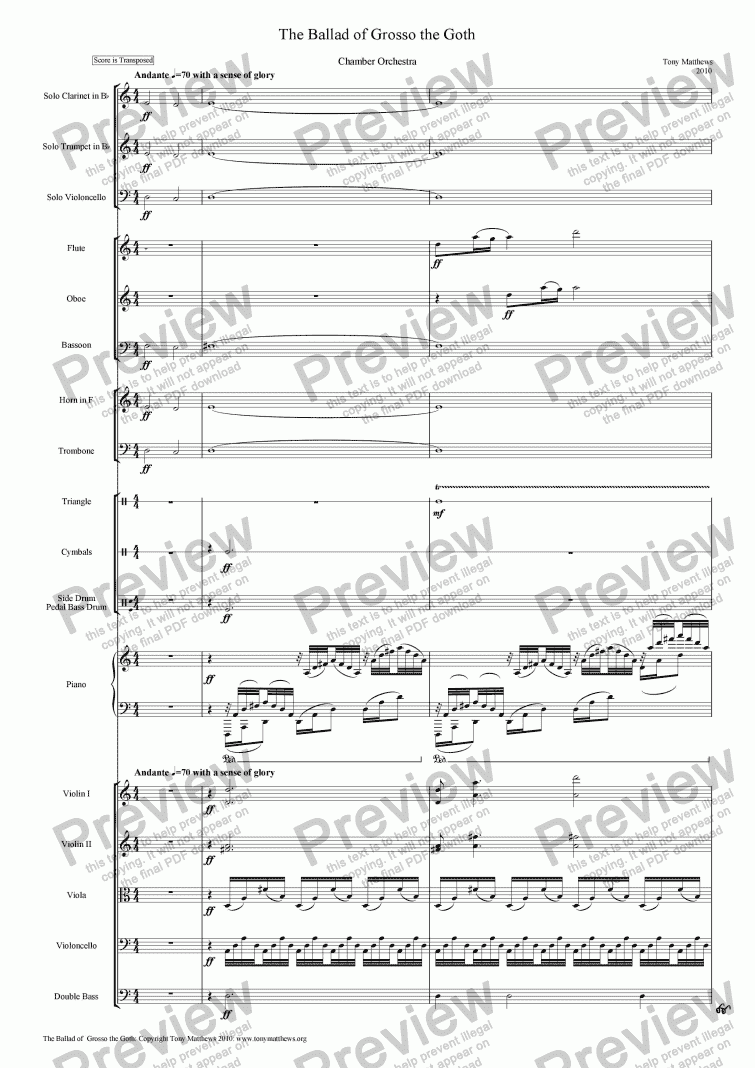 The Ballade of Grosso the Goth

By: Tony Matthews
For: Orchestra

Composer
Tony Matthews
Year of composition
2010
Difficulty
Difficult (Grades 7+)
Duration
6 minutes
Genre
Modern classical music
License details
For anything not permitted by the above licence then you should contact the publisher first to obtain permission.

A submission for a Concerto Grosso like work for the London Composers Forum.

The concerto grosso (Italian for big concert(o), plural concerti grossi) is a form of baroque music in which the musical material is passed between a small group of soloists (the concertino) and full orchestra (the ripieno).

The form developed in the late seventeenth century, although the name was not used at first. Alessandro Stradella seems to have written the first music in which two groups of different sizes are combined in the characteristic way. The first major composer to use the term concerto grosso was Arcangelo Corelli.

After Corelli's death, a collection of twelve of his concerti grossi was published; not long after, composers such as Francesco Geminiani and Giuseppe Torelli wrote concertos in the style of Corelli. He also had a strong influence on Antonio Vivaldi.

Corelli's concertino group was invariably two violins and a cello, with a string section as ripieno group. Both were accompanied by a basso continuo with some combination of harpsichord, organ, lute or theorbo. Handel wrote several collections of concerti grossi, and several of the Brandenburg Concertos by Bach also loosely follow the concerto grosso form.

The concerto grosso form was superseded by the solo concerto and the sinfonia concertante in the late eighteenth century, and new examples of the form did not appear for more than a century. In the twentieth century, the concerto grosso has been used by composers such as Igor Stravinsky, Ernest Bloch, Ralph Vaughan Williams, Bohuslav Martinů, Malcolm Williamson, Henry Cowell, Alfred Schnittke, Krzysztof Penderecki and Philip Glass. While Edward Elgar may not be considered a modern composer, his romantic Introduction and Allegro strongly resembled the instrumentation set up of a concerto grosso.

Reviews of The Ballade of Grosso the Goth

Sorry, there's no reviews of this score yet. Please .
In order to submit this score to ScoreExchange.com Tony Matthews has declared that they own the copyright to this work in its entirety or that they have been granted permission from the copyright holder to use their work. If you believe that this score should be not available here because it infringes your or someone elses copyright, please report this score using the copyright abuse form.