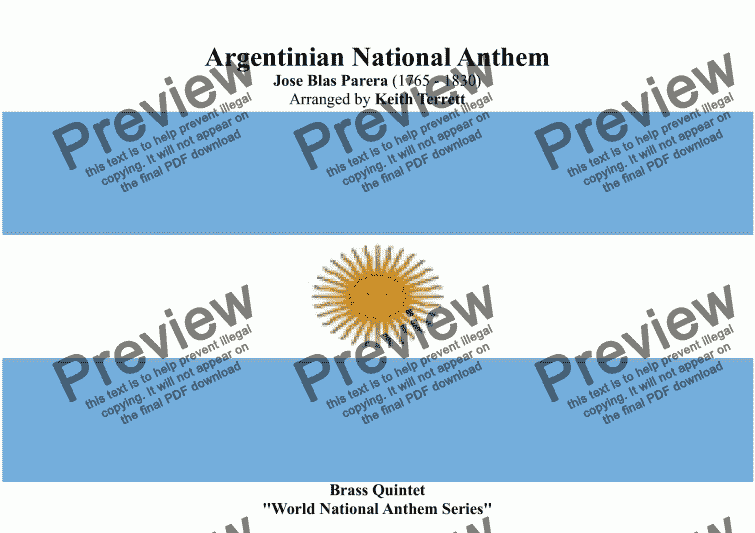 Composer
Jose Blas Parera (1765 - 1830)
Year of composition
1813
Arranger
Keith Terrett
Year of arrangement
2010
Publisher
Music for all Occasions
Difficulty
Moderate (Grades 4-6)
Duration
3 minutes
Genre
Classical music
License details
For anything not permitted by the above licence then you should contact the publisher first to obtain permission.

It was commissioned by the National Assembly in 1813, when the foundations for an independent state were established in La Plata. The words were written by Vincent Lopez Planes and the music written by Spaniard Jose Blas Parera (1765-1830). The work was officially adopted as the national anthem on the 11th of May 1813. Argentina thus became the first Latin American Republic to have a national anthem as a symbol of state.

’Marcha de la Patria’ (’March of the Fatherland’), is the official National Anthem of Argentina which was carried to Peru and Chile by Argentine soldiers in the army of General San Martin, the liberator of those two countries. There is an account of how the General in 1818 during a great celebration at Santiago de Chile magnetized the crowd by singing the Argentine National Anthem with his tremendous basso voice. The ’Marcha de la Patria’ was written by VICENTE LÓPEZ y PLANES (1785-1856) and set to music by BLAS PARERA (1777-1840) in 1813. The composer, was a music teacher, and it seems that he was equally inspired by his familiarity with the Italian operas of Rossini and Donizetti and by his admiration for the German composers of sonatas like Haydn and Mozart. The National Anthem prelude consists of two parts. The first is classical in style, the second with its triplets of eighths recalls the Italian opera. The National Anthem proper is very dignified, and the refrain, introduced by an instrumental interlude, is convincing and powerful. It was declared the official Argentine National Anthem by a resolution of the Asemblea General on May 11 1813. On March 30 1900, a Government decree required it to be performed at all public functions as well as in the schools and institutions of higher learning throughout the country.

The Argentine National Anthem (Spanish: Himno Nacional Argentino) is the national anthem of Argentina. The name of the song originally was Marcha Patriótica (Patriotic March), and was later renamed Canción Patriótica Nacional (National Patriotic Song) and finally Canción Patriótica (Patriotic Song). A copy published in 1847 called it Himno Nacional Argentino and the name has remained ever since. Its lyrics were written by the Buenos Aires-born politician Vicente López y Planes and the music was composed by the Spanish musician Blas Parera. The work was adopted as the sole official song on May 11, 1813, three years after the May Revolution; May 11 is therefore Anthem Day in Argentina.