By: J. S. Bach
For: Orchestra + solo Flute
This music is in your basket
View basket
Loading... 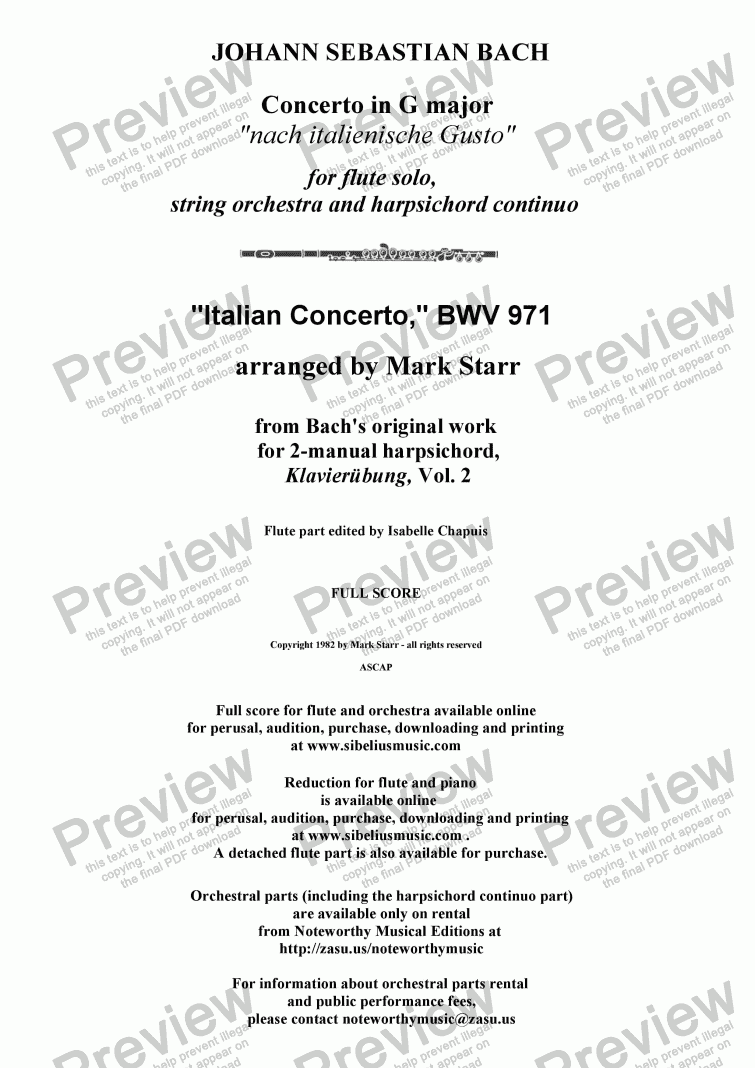 Johann Sebastian Bach composed his "Italian" Concerto for two-manual harpsichord (2 hands). It was first published in Volume 2 of Bach’s collective work entitled the Klavierübung, together with the Overture in the French Style. Because these two pieces were the first works published by Bach to employ dynamics on the harpsichord, today they are often performed on the piano. However, it is clear – from both the titles and the nature of the music itself – that both of these keyboard works are intrinsically orchestral in conception.

In the case of the "Italian" Concerto, Bach combined both a homophonic solo line with a full accompaniment that suggests an orchestra. He reduced all this for the two hands of a harpsichordist – playing a two-manual harpsichord.

The "Italian" Concerto is an original counterpart to 17 keyboard reductions that Bach made of concertos for solo homophonic instrument and orchestra by other composers. He made these keyboard transcriptions for his own edification, drawing from works by Marcello, Vivaldi, Ernst and others. Bach reduced both the solo part and the orchestral accompaniment for harpsichord or organ (2 hands).

No one can deny, however, the possibility that Bach himself created an orchestral version of the "Italian" Concerto before publishing his harpsichord version in Volume II of the Klavierübung – and that the manuscript of the orchestral version did not survive Bach’s death. It is known today that a great deal of Bach’s manuscripts were lost. It has been estimated by various music historians that perhaps as much as a third of Johann Sebastian’s total output has never been never found. It has been deduced by matching Bach’s cantatas to the holidays on which Lutheran festivals fall – that about one third of his output is now missing.

Following Bach’s death, his eldest son, Carl Phillip Emanuel, split up three ways Bach’s own collection of manuscripts: for himself, for Johann Christian ("The London Bach"), and for Wilhelm Friedemann Bach. The latter was an organ virtuoso and a brilliant composer. Unfortunately, however, he was also an alcoholic. W. F. Bach died destitute. Whatever Wilhelm Friedemann Bach did with his share of his father’s manuscripts, they have never turned up – except for one: the St. Matthew Passion, which W. F. B. sold to a Jewish family in Leipzig, who, years later, gave it to Felix Mendelssohn.

What works were lost? Aside from the cantatas, it is not possible to speculate about precise compositions. Bach never made a complete catalog of his music. That one of the lost works might be an orchestral model of the "Italian" Concerto is not impossible.

Thus, an "Italian" Concerto for a solo instrument and orchestra is both a hypothetical and an historical possibility. For those reasons, I call my arrangement a "hypothetical orchestral model," rather than a transcription.

The question then arises: what was the solo instrument that Bach may have had in mind when he first conceived of the "Italian" Concerto? There are several instruments that Bach used in his many solo concertos and the Brandenburg Concertos that are suitable to play the solo line in the "Italian" Concerto. Consequently, I have made multiple versions for solo instruments that are suitable both technically and historically.

The present version is for solo flute, strings and harpsichord continuo. To give the flute the necessary brilliance to compete with a string orchestra, I thought it necessary to transpose the work from F major to G Major. Of course, Bach transposed many of his concerti when he adapted them for various solo instruments.

Here is the first movement of my orchestralarrangement for flute solo, string orchestra and harpsichord continuo. To peruse and hear the second and third movements, just click on the links in the box marked ’Associated Scores.’

A reduction for flute and keyboard (with a detached solo flute part) will soon be made available for perusal, audition, purchase, downloading and printing on www.sibeliusmusic.com. This flute/keyboard reduction is suitable either for preparation of the flute soloist or for performance in flute/harpsichord recitals.

Orchestral parts for my Hypothetical Orchestral Model of Johann Sebastian Bach’s "Italian" Concerto are available on rental from Noteworthy Musical Editions only for public performances and/or commercial recordings. For more information about rental fees, performance fees, and recording licenses, please visit the website of Noteworthy Musical Editions at http://zasu.us/noteworthymusic . The liknk to the webpage for my flute/orchestra arrangement is: http://zasu.us/noteworthy/composers/Bach_JS/italian%20concerto/italianconcerto.html Email inquiries about performance licenses should be addressed to: noteworthymusic@zasu.us .