By: Giacomo Puccini
For: Solo Oboe + piano
This music is in your basket
View basket
Loading... 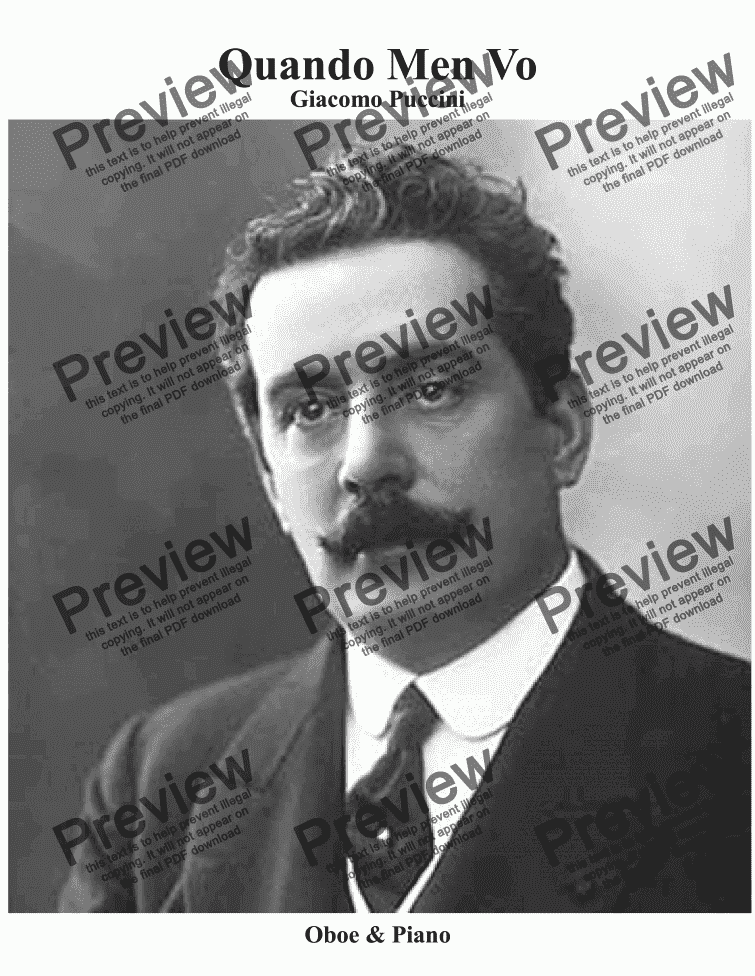 Composer
Giacomo Puccini
Year of composition
1904
Arranger
Keith Terrett
Year of arrangement
2011
Publisher
Music for all Occasions
Difficulty
Moderate (Grades 4-6)
Duration
3 minutes
Genre
Classical music
License details
For anything not permitted by the above licence then you should contact the publisher first to obtain permission.

Quando Men Vo for Oboe & Piano, and part of a new series of Italian opera arias and Neapolitan songs.

La bohème is an opera in four acts by Giacomo Puccini to an Italian libretto by Luigi Illica and Giuseppe Giacosa, based on Scènes de la vie de bohème by Henri Murger. The world premiere performance of La bohème was in Turin on 1 February 1896 at the Teatro Regio and conducted by the young Arturo Toscanini. Since then La bohème has become part of the standard Italian opera repertory and is one of the most frequently performed operas internationally. According to Opera America, it is the second most frequently performed opera in the United States, just behind another Puccini opera, Madama Butterfly. In 1946, fifty years after the opera’s premiere, Toscanini conducted a performance of it on radio with the NBC Symphony Orchestra. This performance was eventually released on records and on Compact Disc. It is the only recording of a Puccini opera by its original conductor.

Its resurgent popularity in the 1990s was down to one thing: the use of one particular section of the opera in a certain television commercial. The Flower Duet first appeared in a British Airways advert in 1989 and quickly became one of the most well-known pieces of classical music in Britain.

Up until then, the opera had lain in relative obscurity. Its only slight success had been that, unlike other operas by the composer, this one had remained in the repertoire of major opera companies worldwide and continued to be held in high esteem by the classical music cognoscenti. It’s a tragic opera set in the Orient, a place known for its beautiful flowers – hence the title of this duet, sung by the principal character Lakmé and her slave Mallika. The sumptuous, exotic music is light, delicate and instantly beautiful, much like the flowers it depicts. The Flower Duet’s use in popular culture isn’t restricted only to those British Airways commercials. More recently, it’s been heard in films such as Meet the Parents and True Romance and television shows including The Simpsons.