By: John Wesley
For: Brass quartet
This music is in your basket
View basket
Loading... 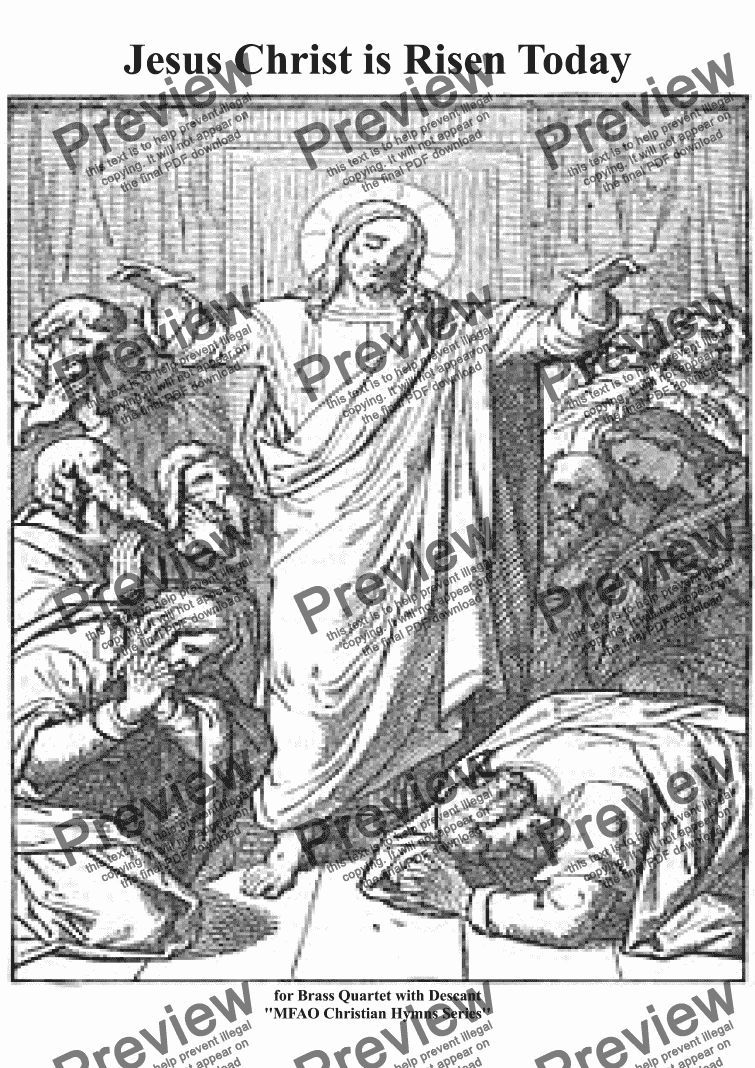 By: John Wesley
For: Brass quartet

Composer
John Wesley
Year of composition
1739
Arranger
Keith Terrett
Year of arrangement
2019
Publisher
Music for all Occasions
Difficulty
Moderate (Grades 4-6)
Duration
2 minutes
Genre
Classical music
License details
For anything not permitted by the above licence then you should contact the publisher first to obtain permission.

Jesus Christ is Risen Today, arranged for Brass Quartet, with a sparkling Bb Piccolo Trumpet descant; which could be performed on a D, Eb or Piccolo in Bb/A. There is an alternative Descant part provided one octave lower if required e-mail me if you need it: keithterrett@gmail.com

This arrangement was made for Nathaniel Mayfield and his Brass ensemble in the USA. Listen to Nathaniel on Youtube if you would like to hear an amazing player!

This arrangement is a must for your Easter performance!

There is also an arrangement in-store for three Bb Trumpets & Trombone.

This famous Christian Easter Processional Hymn has been artfully arranged by Keith Terrett for Brass Quartet with Bass Trombone or Tuba on the bottom part.

The Hymn’s origin goes back to the 14th century and was eventually added to the John Wesley hymnal in 1739.

This arrangement has one harmonization for all of the verses, and a final more elaborate section for optional piccolo trumpet (which can be performed down the octave very easily).

The arrangement can be performed by intermediate level players and can be an important part of your Easter service.

Trumpet parts are in B-flat. If you require another transposition, let me know.

"Jesus Christ Is Risen Today" was first written in Latin titled "Surrexit Christus hodie", as a Bohemian hymn in the 14th century by an unknown author on manuscripts written in Munich and Breslau. In Latin, it had eleven verses. It was first translated into English in 1708 by John Baptist Walsh to be included in his Lyra Davidica (Collection of Divine Songs and Hymns). The verses of the hymn were revised in 1749 by John Arnold. Initially the hymn only had three verses translated with just the first verse being a direct translation; in 1740 Charles Wesley (one of the founders of Methodism) added a fourth verse to the hymn as an alternative, which was later adopted into the hymn as part of it. The hymn is also noted for having Alleluia as a refrain after every line.