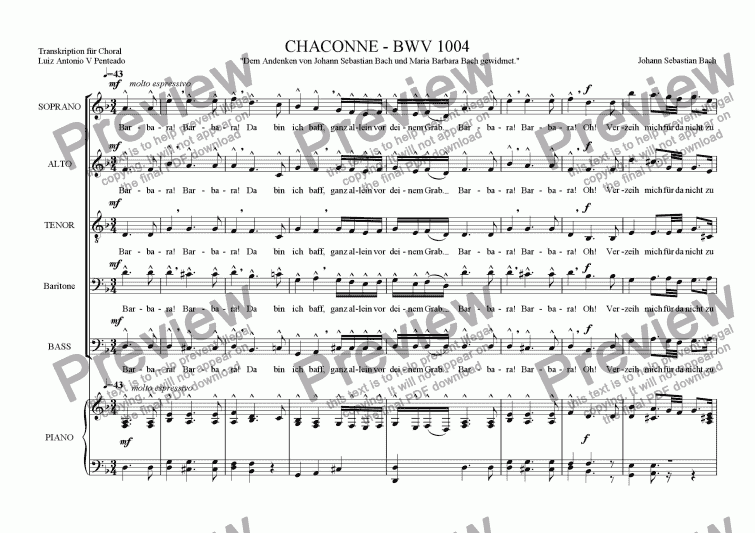 The Bach�s Chaconne is my favorite music for more than thirty years and I regret for don�t have known it before. When I met this music, I did not know about its history, mainly that it has been composed in memorian of Maria Barbara Bach, the first wife of Johann Sebastian Bach. She died unexpectedly in 7th July 1720, when Bach was absent for reason of work. She gave him seven children in thirteen years of marriage. Three of these children died in a very tender age. Bach did not write a dedication in the score, but through this music, originally composed in that same year, 1720, for solo violin, without lyrics, he tell us his history, or their history, of love and loss. All the Bach�s biographers did not find much information about Maria Barbara. She was a far cousin of him, and an orphan as him too. They met in Arnstadt about 1703 and got married in 1707, in Dornheim, a small village close to Arnstadt. Barbara was a not professional singer, but it is known that she had a beautiful voice because Bach invited her to sing in the Church in Arnstadt, when they met. Because of that, he has been reprehended by the city council, the Bach�s employer, because at that time the women were forbidden of sing in the churches. She died in Köthen at the age of thirty six years old. When Bach came back home he has been told that his wife had died and been buried ten days ago. The lyrics for this choral transcription have been written while listening to a violin record of the original score.

In order to submit this score to ScoreExchange.com Luiz Antonio V Penteado has declared that they own the copyright to this work in its entirety or that they have been granted permission from the copyright holder to use their work. If you believe that this score should be not available here because it infringes your or someone elses copyright, please report this score using the copyright abuse form.