By: Trad
For: Large mixed ensemble
This music is in your basket
View basket
Loading... 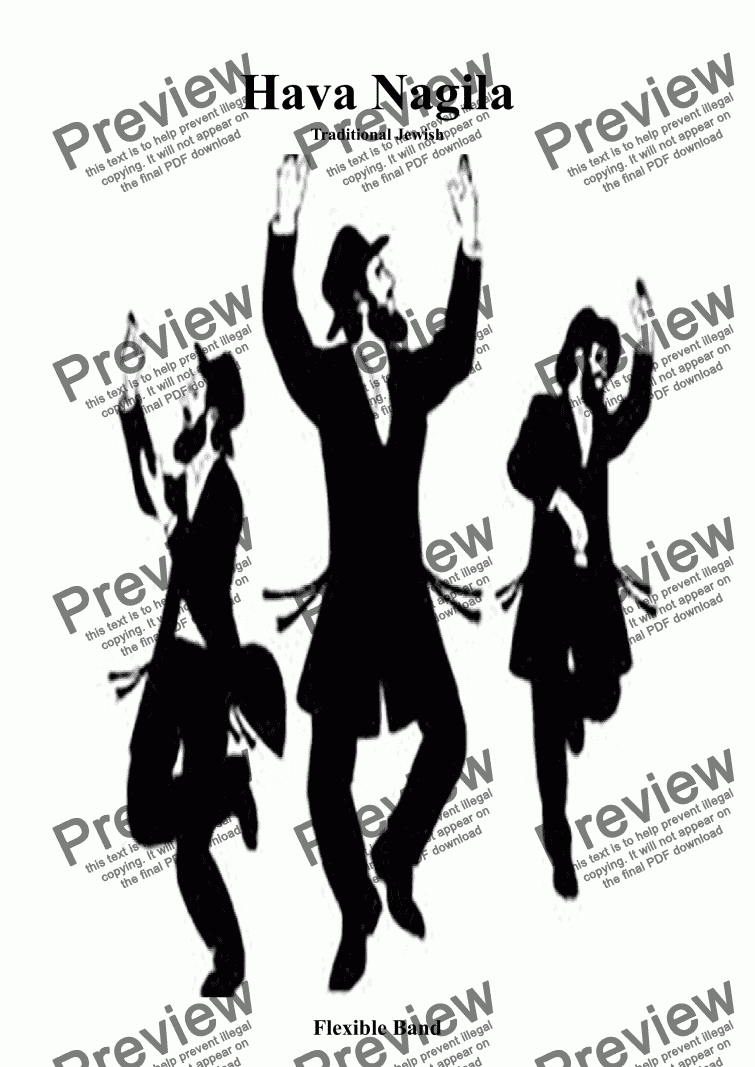 By: Trad
For: Large mixed ensemble

Composer
Trad
Year of composition
1918
Arranger
Keith Terrett
Publisher
Music for all Occasions
Difficulty
Easy (Grades 1-3)
Duration
2 minutes
Genre
World music
License details
For anything not permitted by the above licence then you should contact the publisher first to obtain permission.

"Hava Nagila" (Let us rejoice) is a Hebrew folk song that has become a staple of band performers at Jewish weddings and Bar/Bat Mitzvahs.

The melody was taken from a Ukrainian folk song from Bukovina. The commonly used text was probably composed by Abraham Zevi (Zvi) Idelsohn in 1918 to celebrate the British victory in Palestine during World War I as well as the Balfour Declaration.

With its sinuous Phrygian Dominant tonality, it makes a great chart with opportunities for improvisation.

Without even knowing it millions of people are acquainted with Abraham Zvi Idelsohn. He is the father of the most emblematic and best known Israeli folksong: "Hava Nagila". This song has long ago crossed the frontier of Israel and entered the world music hall of fame. Hava Nagila was recorded maybe thousands of times by artists of all horizons in countless versions, it became a standard for Jewish and non-Jewish as well.

The melody is based on a Sadigorer hassidic nigun from Bukovina. In 1915, while serving as a bandmaster in the Ottoman army,Idelsohn transcribed the melody and added simple Hebrew lyrics:

In 1918, The Turks were defeated and the British were in Palestine. Idelsohn needed a tune to celebrate the Balfour declaration and the luck or the hazard of life made him choose among all the melodies this particular one. It became an immediate hit, it spread enthusiastically throughout the Jewish settlement and in the next years the song was included in the Jewish repertoire in Europe and in the United States.

With the creation of the State of Israel Hava Nagila became a kind of alternative popular anthem. Danced as an Israeli hora (quick tempo) it is assimilated to the image of the sabra (native of Israel), the builder of a young nation.

From the fifties until now the popularity of Hava Nagila had never failed, from the Barry Sisters to Harry Belafonte, from Afro-Cuban orchestra to Gypsy band, hundreds of artists have added this song to their repertoire .

Hava Nagila is a song of joy, hope and brotherhood, it is catchy and buoyant, from Hassidic Bukovina to disco clubs, LET’S DANCE and thank you, Maestro Abraham Zvi Idelsohn.

Hava Nagila may symbolize the blending of styles, of cultures, of musical genres all over the world. There are hundreds of different version and arrangement of the tune.

Reviews of Hava Nagila (Let us Rejoice) for Flexible Band