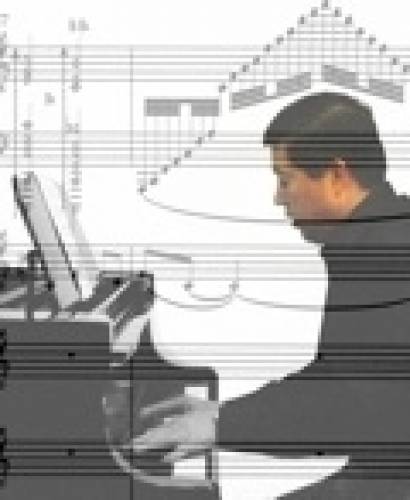 – I feel that Austin Huang has been a composer by nature although he hasnʼt started composing until recently. Now, he is merely writing down his works that have been in his mind for many years. – Shihai Bai, Conductor of Changchun Film Orchestra, China

Austin Huang is an engineer and composer. Rigorous training in engineering field through Ph.D. dissertation helps him tremendously in music composing. He sees much similarities between writing a research paper and composing a concerto.

Austin Huang was born in northeast China in a small village far away from big major cities, where his parents worked as government workers for an oil shale mine owned by the national government. Since then he has moved two times during his childhood with his parents as they were assigned to different jobs at different locations. But the two locations are all within the northeast China and remote from major cities or towns. So he did not have much of opportunities for formal music education in his early childhood. Until 15 years old, he had a chance to visit Shenyang, the biggest city in northeast China, where his father was hospitalized. For rewarding his courage and willingness to take the adventure because his 18 years old brother was scared to take the duty, his mother gave him 10 Chinese Yuan for buying a gift for himself as a treat. He bought a Chinese instrument Erhu. He then trained himself to play Erhu. His music adventure was really started when he was 16 years old, when he transferred to a railroad school in the town of Chaoyang that is the capital of the county Huinan of Jilin Province. He was selected to join the student performing art group, learning and playing Chinese instrument Banhu and learning violin with a professional musician, who works in the provincial orchestra in Changchun but lives in the town. Next year, when he was 17, the county organized a student performing art group and he was auditioned into the orchestra as violin and principal Banhu player. There he has learned major stage performances and started to gain knowledge and experience with western instruments. When he graduated from the school, he and his colleagues in the student performing art group were all accepted together by a commune (during that time China was in the Culture Revolution and all school graduates were sent to rural to do farm work). So he and his colleagues were still performing while officially as peasants workers in the rural area. Where he performed almost full time for three years (since for majority of times the group rehearsed and performed with little time to do the farm work). During those three years, the group traveled and performed in various locations, various type operas, programs and repertoires. But, he did not even think about that he has ability pursuing music as a career, since he thought that people in bigger cities should be much better and advanced for they have much better resources and opportunities. So when China opened up first time for college admission through national examination in 1977 after the Culture Revolution, he did not even think of going for music education for he did not think that he was good enough.

In 1978, he was admitted into China University of Mining and obtained a BS degree in Mining Engineering in 1982. In the same year, he passed a national exam and was admitted into a Chinese Education Ministry-sponsored graduate study program in the United States. In 1984, the composer began graduate study in University of Wisconsin-Madison, USA and obtained both MS and Ph.D. degrees in Rock Mechanics of Geological Engineering in 1989 and 1990, respectively.

Parallel with his career in engineering, his understanding and enjoyment of western classical music increased and accumulated incrementally. He retooled his violin skills and undertook piano study under the guidance of a piano teacher as preparation for future composing. Since fall 2005, he has been organizing a biennial Chinese New Year Concert as artistic director. The concert features unique Chinese music, especially using a western symphonic orchestra to play Chinese music, bringing fresh air into the area and introducing Asian music and culture to American people, a practice which has received warm welcome. Through organizing these events, he has really felt the lack of written Chinese works for performance by western orchestra. He then decided and began his study of western music theory and composition in 2006 through private lessons with Dr. Roger Briggs, professor of music at Western Washington University, composer and conductor of the Whatcom Symphony Orchestra. He aims to use western ways of musical expression to perform Chinese music and convey its spirit.