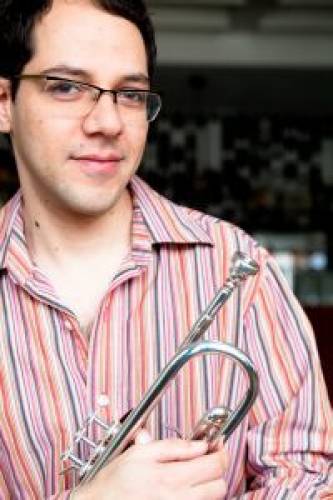 Michael Simon chose at a very young age to follow his own bliss. Born in 1975 in Venezuela and the youngest of a musical family, he learned to play the trumpet when he was a child. His first musical ecstasy was experienced in Curaçao, where he visited his father. After a concert of the legendary Cuban orchestra “Irakere” at an international jazz festival he knew what it was he wanted most. So in 1991 he traveled to Cuba to study the trumpet. Amongst his teachers were many of Cuba’s greatest trumpet players like Juan Munguia, Roberto Garcia, El Greco, José Alberto Varona and Alfredo Pichardo. In Curaçao Michael joined several jazz and Latin formations. While his two brothers Marlon and Edward went to the USA, eighteen-year-old Michael chose the Netherlands for his musical education. Five years later he completed his trumpet study at the jazz department of the Rotterdam Conservatory and later graduated in arranging and composing. In 1996 Michael Simon was asked to join the Fra Fra Sound. A year later he played at the famous North Sea Jazz Festival with Fra Fra Big Band, and the following year with the Geraldo Rosales Latin Jazz Ensemble. Until now Michael has been part of the basic formation of both bands and has written many appealing and dazzling compositions. Michael Simon travels all the world’s festivals and stages with his different bands and formations.

My music
Falling in love with love
I AND HE
Music for Gong Gong
The Cigarette Girl
ScoreExchange.com is operated by ADAP Solutions Ltd. ©
Sell sheet music |
Terms | Privacy |
Contact us | Blog |
Advertise | Help