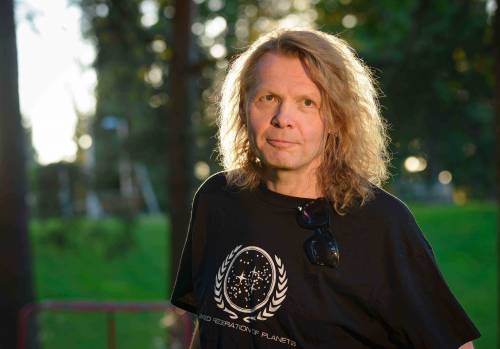 Contact Seller
Please note that you will need to sign in or register before you can contact this seller
Address:
Mr Jukka Viitasaari
Sammonkatu
36 B 39
Tampere
33540
Finland

Jukka Viitasaari (b. 1961), M.E., is a former Finnish classroom teacher with a musical background (including studies in music theory, rock, jazz, and low brass instruments.) His instruments are the tuba and the guitar and he has composed dozens of pieces for windbands of various forms of which about 60+ have been published in Finland and several other by the Dutch publisher Bronsheim Muziekuitguiverij and the US TRN & BRS-Music.

In 2000, the Finnish Conservatory Bands Puhuri and Junior Big Band released the first CD featuring his (big)band music: "Born in the Sauna, the music of Jukka Viitasaari".

He is also a dedicated amateur rock guitarist, playing covers in the 70`s Show and Lets Eppelin. The Finnish Central Council Of Arts granted him a stipend to compose in 2002 and 2005 as did the Finnish Cultural Foundation in 2007.

A word from his mentor, associate professor of music Paul Niemisto, St. Olaf College, MN, USA: "Jukka Viitasaari is an unique voice in Finnish band music in that he strives to incorporate old traditional folk music idioms into modern formats."

Notable commissions include "The 3-D Musketeer"(2003) by the KSU Trumpet Ensemble and "The Virtual Alchemist" (2004) by the KSU Brass Quintet both conducted by dr. Gary Mortenson at the rescpective ITG World Conferences as was "Sandman´s Day Off" (for dr. Luis Engelke) in 2005 and "Winter Reflections" (2005) commissioned by Dan Gordon and the Plattsburgh State University of New York Symphonic Band.

His works in a similar vein include the 15-minute "The Missing Season" (commissioned by the Concordia College Band, Moorhead MN), winner of the 2nd prize in the international competition for a composition for wind band held in Corciano, Italy 2001.

"Lord Of The Sauna" gained an honorary mention in 2. Concours International de Composition Musicale held by the Lys Music Orchestra, Belgium 2003. Also in 2003 "Gone Fishing" (Angeln gegangen) made it to the finals in a German composition contest held by the Saxionade youth band festival.

In 2004 he won all three categories (A-B-C) in a contest held by the Finnish Wind Band Association. The victorious pieces were "Rain Dances", "Tango Fantasy" and "Portrait Of A Searcher". Also in 2004, he won the 2nd prize in a march composition contest Sotapojan taivas ("G.I.s Heaven") with "The Young Lions".

In 2005 he won the 1st prize in a composition contest held by the Finnish Wind Band Association and the Composers and Arrangers of Finland with "Solos, Anyone?" and in 2006 "Light up the Sky" (symphonic wind band work) won the 1st prize at the VIII Concorso Pernice composition competition in Canicattini Bagni, Italy and "Strange Dreams" the 2nd prize at Concours international de composition pour orchestre d'harmonie Lambersart - France.

SD also gained the 2nd prize at Humboldt Brass Chamber Music Workshop Composition Contest - USA (2007) as a brass sextet version. LutS and SD will be published by TRN and "Aba-Zulu"(for six trumpets) and "Portrait of a Searcher" (Clarinet Choir) by BRS-Music.

2010: "Runner up" prize (equivalent of the 2nd prize) from Columbia Summer Winds contest with "Dance of the Epiphytes" a n d the second prize in Italy with "Sweet Suite" at III Sinnai International Wind Band Composition Contest. Brass Quintet, sextet and septet versions of "Strange Dreams" out from TRN.

Viitasaari is a member of the Finnish Composers Society.