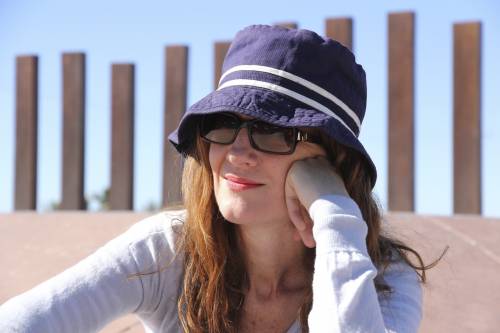 Multi-award winning composer Andrée Greenwell works diversely across mainstream and experimental platforms within the Australian performing arts, film and television. She a leading creator of music theatre in Australia, and a most versatile composer for voice, described by Keith Gallasch as occupying:

'a special place in the musical culture of Australia. Her distinctive compositions sit uniquely at the nexus of folk, opera, pop, jazz and avant garde trajectories' (Realtime 53).

Her music-theatre work "DREAMING TRANSPORTATION: Voice Portraits of the First Women of White Settlement at Port Jackson", based upon the verse history Botany Bay Document by Jordie Albiston, was commissioned for the Sydney International Festival of the Arts to critical acclaim, and received a further season at The Playhouse, Sydney Opera House, in 2004. DREAMING TRANSPORTATION was also studio recorded by the ABC Music and Drama Units for various feature programmes, one of which went on to win an international prize; and the title song won "best classical composition" at the MusicOz Awards 2004.

Through her studies at the Australian Film Television and Radio School Andrée directed, produced and composed the video opera clip MEDUSAHEAD: a video opera clip for decapitated soprano and 3D animated snakes starring the soprano Helen Noonan, which toured to many international electronic arts and film festivals. Following the success of MEDUSAHEAD, Andrée established Green Room Music as a platform to develop screen and performance projects. The first of these, LAQUIEM:Tales from the Mourning of the Lac Women, began as a CD based upon the novella by Kathleen Mary Fallon, then became a performance work that played at The Sydney Opera House, which Greenwell later adapted and directed for the screen, with the assistance of the Young Film Makers Fund of the NSW Film and Television Office. The short film LAQUIEM screened at many international film festivals and on SBS.

Andrée recieved the prestigious biennial NSW Women in Arts Fellowship in 2003. This award allowed her to compose and develop the new music-theatre work "The Hanging of Jean Lee", based upon the verse biography by Jordie Albiston, that traces the life of Jean Lee, the last woman to be hanged in Australia, in 1951. "The Hanging of Jean Lee" premiered at the Sydney Opera House in 2006, was released on CD in 2012. A concert version was recently presented at Arts House North Melbourne in December 2013.