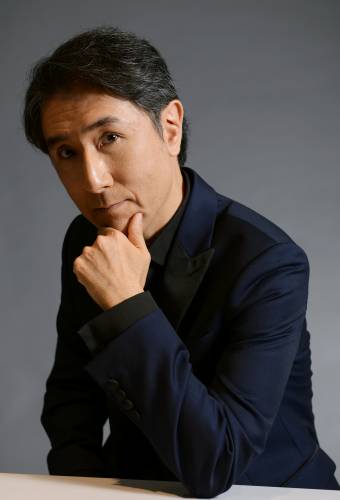 Marimbist Makoto Nakura is a musician whose artistry and astonishing virtuosity has been mesmerizing audiences for several decades. In 1994, Makoto moved from his native Japan to New York City, becoming the first marimbist to win first prize in the prestigious Young Concert Artists International Auditions. His critically acclaimed performances around the world have included venues in London, Paris, Berlin, Tokyo, Hong Kong, Seoul, Montreal, Sao Paulo and Buenos Aires.

In the U.S., he has performed for audiences in 41 of the 50 states, with orchestras such as the New York Chamber Symphony, the Chicago Sinfonietta and the Los Angeles Chamber Orchestra and, as a recital soloist, his long list of appearances includes Carnegie’s Weill Recital Hall and Washington’s Kennedy Center. He has appeared as a guest artist with The Chamber Music Society of Lincoln Center and with the American Ballet Theater in New York City. A television portrait of Mr. Nakura was shown on CBS News Sunday Morning throughout the U.S.

Mr. Nakura has established himself as a dedicated champion of the music of our time. Since he founded the ISGM New Music Commissioning Fund in 2001, he has commissioned many works for the marimba from leading composers.

Born in Kobe, Japan, Mr. Nakura began to play the marimba at the age of eight. He earned both Bachelor's and Master's degrees from Musashino College in Tokyo and continued his studies at the Royal Academy of Music in London from which he was named an Associate.

His recent honors include a National Arts Festival New Artist Award from the Japanese Agency of Cultural Affairs . His CDs “Ritual Protocol”, “Triple Jump”, “Wood and Forest” and “Tanabe Marimba Works” are devoted to works written especially for him. He also recorded “Bach Beat” and "Bach Beat II" which consists of Bach transcriptions made by Makoto.