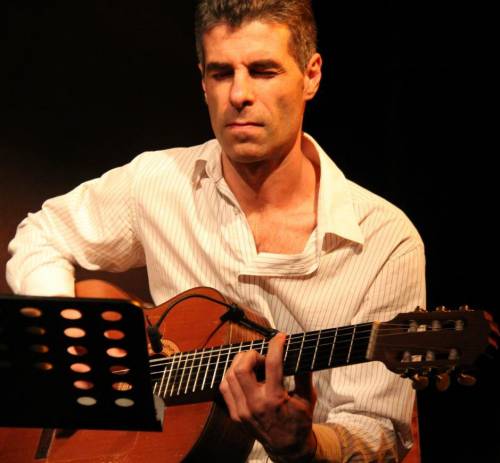 Born in Tel-Aviv, Israel, Hagai began playing guitar at the age of 15. He learned to play his first chords from books and friends. After being exposed to the work of important Israeli composers such as Matti Caspi, Yoni Rechter and Shlomo Gronich, he gradually started to expand and develop his own chord vocabulary and technique. After completing 3 years of military service in the Navy, Hagai enrolled the "Rimon School of Jazz and contemporary music" graduating in 1994. He has also MA in Composition from Rubin Academy,Jerusalem

Enchanted by Brazilian music for many years, primarily through his Brazilian neighbors, who first introduced him to the sounds, language, and images of Brazil, Hagai decided to "drink straight from the source", and in 1995 he landed in Rio de Janeiro for the first time.

Since then, he has visited Brazil 3 more times, where he has participated in various seminars. Hagai had the great privilege to encounter closely some of the great Brazilian Guitar Masters such as Marco Pereira, Ulisses Rocha and Toninho Horta, discovering through them the secrets of Brazilian guitar.

In 1998 he established "Tucan Trio". The band performed his own compositions as well as innovative arrangements of Brazilian tunes. The trio consisted of Flute player Amir Milstein, Percussionist Joca Perpignan and Hagai on Guitar.

The "Tucan Trio" successfully participated in some of the most important music Festivals in Israel such as The International Guitar Festival (Tel Aviv 1999) and The Israel Festival (Jerusalem 2000) with the Brazilian mandolin virtuoso Armandinho, and also toured Russia twice (2001) and the U.S.A. (2002 with Armandinho).

Throughout its 13 years of existence, the Trio was exposed to tens of thousands of people, which resulted in the making and release of the very successful album "Tucan". in 2011 they release their second Album with The Brazilian Mandolin Virtuoso Armandinho- "Armandinho&Tucan Trio "Live Hagai’s performances to-date include also an appearance as guest guitarist with internationally renowned Brazilian composer Edu Lobo and the Israeli Philharmonic Orchestra in 2002, an Israeli tour concert with the contemporary Brazilian singer Mausha accompanied by The Israel Kibbutz orchestra in 2004, and acontiniues cooperation with Israeli leading composer Matti Caspi At the international Red Sea Jazz Festival 2004 Hagai was praised by the critiques for his Quartet’s performance. Hagai's also realesed a solo Album called "Bebe" (2005), featuring predominantly original tunes with Brazilian orientation, and some modern arrangements for specially selected Brazilian repertoire. Hagai Is a very known Educator in Israel,and he has published 4 Guitar Books named "Israeli Guitar", Whic contain guitar arrangements for the Best Repertoire of Israeli songs.