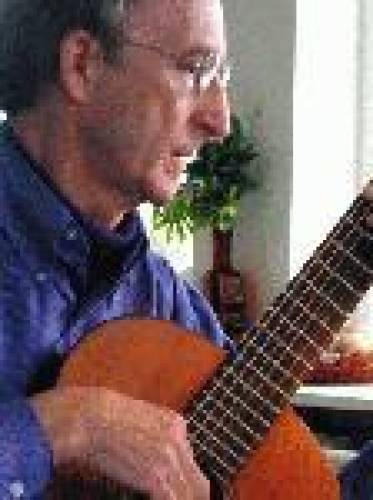 Ray Braun lives in Port Angeles, Washington, near the northwest corner of the U.S. He and wife, Carolyn, moved to this wonderful wooded place overlooking the Strait of Juan da Fuca and Victoria, B.C., Canada in 1999. They both grew up in the eastern US and lived in Delaware for many decades. Ray, now retired, has been a public school special education teacher, owned and ran a commercial printing business, and has taught guitar for more than 45 years. As a guitar teacher, he worked one on one, with hundreds of students as young as 7 years to as old as 90. In 1972 he self published his "Basic Studies for Classical Guitar" and in 1997, republished a considerably expanded version of the method under the shortened title of "Basic Studies for Guitar." The method evolved out of a conviction that practice material needed to be more specifically targeted/narrowed to given skills that students should learn in their beginning year. For example, try as you might, it is extremely difficult if not impossible, to find a beginner study that does NOT mix rest and free stroke within the same piece. The few that can be found are rarely, if ever, musically enjoyable or they are too difficult for a beginner. The method therefore, evolved to meet several criteria the first of which is high emphasis on musically attractive and therefore, highly motivating practice material. Another objective was to create pieces that contain substantial repititions of the skill being taught. Part one teaches note and basic rhythm reading while learning rest stroke only. Part two focuses on solely on rest stroke fingers interacting with alternating and simultaneous thumb strokes in short pieces with increasingly complex left hand work. Part three returns to relatively easy left hand work while focusing on learning correct hand position for free stroke work. Rest Stroke review is included. Part four focuses on pieces which include rest and free stroke within a piece, and ultimately within single beats in addition to increasingly complex left hand work. Many of the pieces included in Basic Studies can be found under my name on this site. In the musical notes which accompany the pieces it is mentioned if they are part of the book. A careful examination of any of the pieces will reveal that they are much more than just good music that can become a permanent part of a students early repertoire. In fact, each piece was very carefully engineered (I dare say, rather than 'composed') to help a student master, almost in spite of him/herself, a specific skill. Over time I will be uploading more studies from the book. Other works in my list are not connected with Basic Studies and were written/arranged either for our recently formed "Peninsula Guitar Ensemble" (currently 5 members)or just for the fun of composing. I plan to spend much of the rest of my life in the joy of musical creation, wherever that takes me.