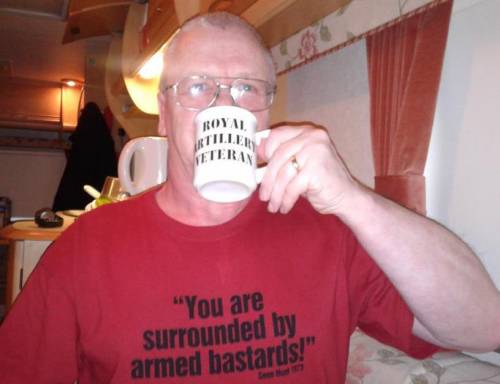 I have no "paper" musical qualifications whatsoever!! Quite awkward when I get asked by some of the younger players "So, what grade are you, then?" I have no grade due to the fact that I've never taken a music exam in my life.What I do have though is 30 years of playing in brass bands around the north west of England. I started on the tenor horn at school (just so that I didn't have to queue up for dinner!long story), Joined the British Army with the intention of becoming a member of the Royal Artillery Band, but after my basic training decided to 'soldier on'. I gave up the playing while I settled in to a different life, eventually married and re started banding around 1992ish, this time on 3rd Cornet and progressed (?), eventually, to principal cornet for over 8 years with Stockport Silver Band,the band that I ended up runnng for a few years. I've always enjoyed taking part in many band contests up and down the country, including the famous (or should that be infamous) Whit Friday contests, won a few, lost a few. As a veteran I've been tasked to play the Last Post at a few services, not an easy job, a job that has to be done with the utmost reverence. Got a lot of scores that I've played with but can't publish them due to copyright rules, never mind eh? I have played and guested with many and varied brass bands (Hazel Grove, Manx Concert, Whalley Bridge, Belle Vue, Sale Brass, Gorton Silver and many more, too numerous to mention) , including the massed band at the closing ceremony of the Manchester Commonwealth Games, my main band now is Elmfield Brass, based in Great Moor, Stockport. As a former soldier and a cornet player I've been asked frequently to play the Last Post on solemn occasions or benefit concerts, something that, although I feel highly honoured to do, fills me with the kind of terror experienced when someone does their first bungee jump. I got into arranging and re-arranging through necessity with the Stockport Silver Band when we were down to just a few players and had concert time to fill, and found I really enjoyed the challenge. It was all done in pen and paper 'til I discovered Sibelius software and subsequently moved onto the 20th century, admittedly I waited until the 21st century to do this. Offering my scores for free because I've always believed that as soon as you get paid for your hobby it ceases to be fun any more. Over the years I've been asked, both via this site and by word of mouth,to arrange various pieces for quartets, junior bands and some "name" bands here in the U.K and around the World. Hope you like what's here, any feedback is welcome (as long as it's not too critical) feel free to praise unconditionally.