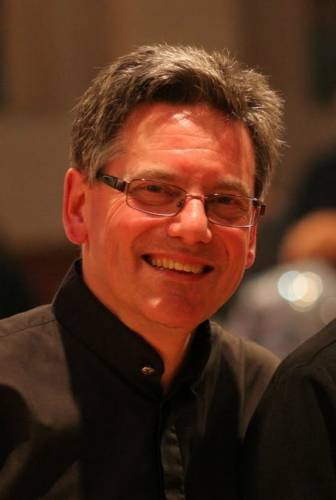 Lawrence was born in Keighley West Yorkshire in 1959 and now lives in Halifax. After playing trumpet with many local orchestras and the national Youth Orchestra of Great Britain, he commenced studies in composition at Bath University, where he gained a first class honours degree in composition. Whilst at Bath he studied with George Odam, John McCabe and Hans Keller; the Dartington String Quartet performed the premier of his Scherzo for String Quartet. It was Arthur Butterworth, the well known composer and conductor from Skipton, who inspired Lawrence to take up composition and conducting.

He became an Associate of the Royal College of Music (ARCM) for trumpet performance in 1980 having studied trumpet with Colin Casson, David Mason and John Wallace.

A year at the National Centre for Orchestral Studies (NCOS) followed where Lawrence played orchestral trumpet to a professional level. It was here that he had the opportunity to work with many conductors including Sir Colin Davies, Sir Charles Groves, Sir Simon Rattle, Genahdi Rohzdestvensky and George Hurst. Lawrence conducted the NCOS Orchestra in a performance and recording of his Overture for orchestra ‘Main Street’.

Since 1987, when he took up the post of conductor with the Todmorden Orchestra, Lawrence has conducted many regional orchestras including: Huddersfield Philharmonic, Airedale Symphony Orchestra, The Sinfonia of Leeds, Halifax Symphony Orchestra and the West Riding Sinfonia. He is a founder member of the Orchestra of Square Chapel and has been their conductor since its formation in 1997.

To date he has had two works published and his First Symphony was broadcast on Classic FM. The Orchestra of Square Chapel performed the premier of his Sinfonietta ‘A Christmas Carol’ for orchestra and narrator in 2001.