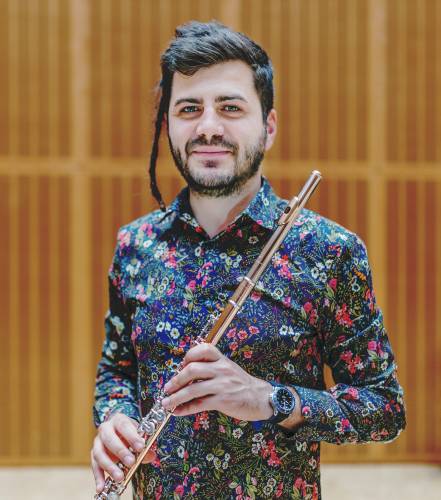 Stefan Diaconu (25.09.1990), Romania, flute, is curently flute player in V Coloris woodwind quintet and guest teacher at National University of Music from Bucharest. Until this year he has been the principal solo flute in the Lebanese Philharmonic Orchestra, besides that he is frequently invited to play with the Copenhagen Phil, the Royal Danish Orchestra, the Gorzow Philharmonic Orchestra – Poland, the National Symphony Orchestra of Romania and the George Enescu Philharmonic Orchestra – Romania. In june 2017 he graduated with a Master’s degree from the Royal Danish Academy of Music, and now he is following the Advanced Postgraduate (Soloist) Programme at the Danish National Academy of Music as well as taking his PhD at the National University of Music, Bucharest – the conservatorium from which he initially graduated with a bachelor’s degree in Flute Interpretation as well as Orchestra Conducting. His studies have been guided by important flutists such as Ion Bogdan Stefanescu, Ulla Miilmann, Russell Itani, Anna Dina Schick Bjørn Larsen and Rune Most. In addition to his orchestral activities he is very dedicated to chamber music, and he frequently organizes and conducts projects himself and makes use of his own musical arrangements.