By: Felix Mendelssohn
For: String orchestra
This music is in your basket
View basket
Loading... 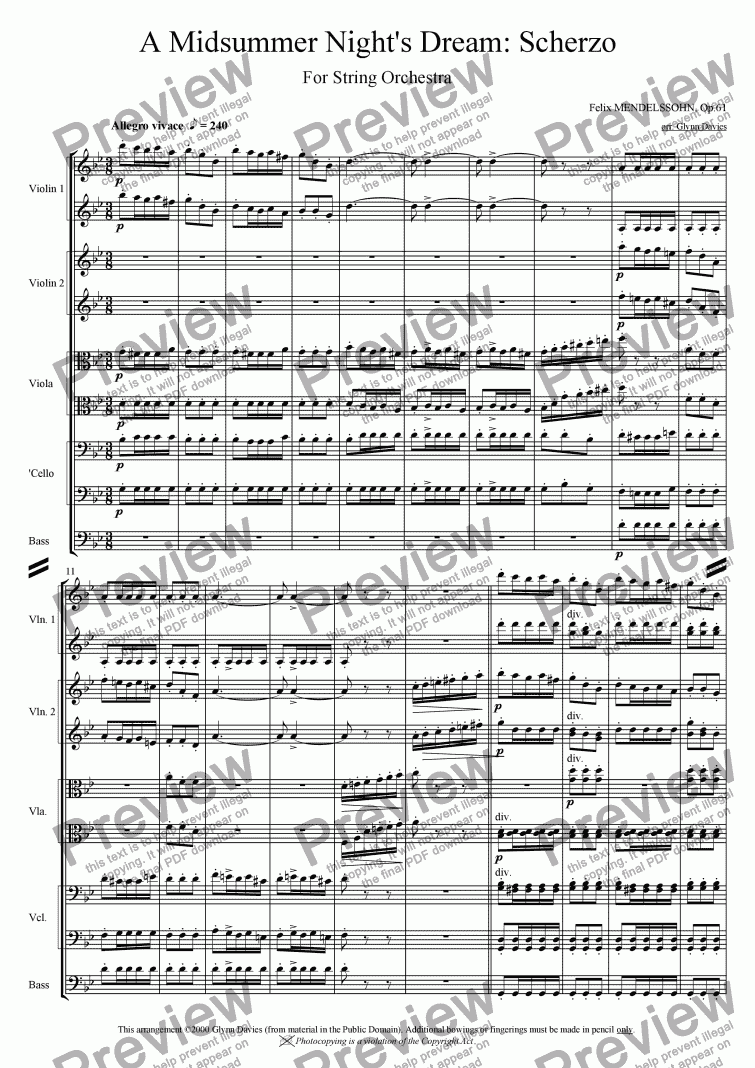 By: Felix Mendelssohn
For: String orchestra

Composer
Felix Mendelssohn
Year of composition
1843
Arranger
Glynn Davies
Difficulty
Difficult (Grades 7+)
Duration
5 minutes
Genre
Classical music
License details
For anything not permitted by the above licence then you should contact the publisher first to obtain permission.

Mendelssohn's incidental music for A Midsummer Night's Dream, Op.61, was completed 16 years after he wrote the Overture, Op.21. The consistency of style and musical unity between them belie the disparate dates of composition. The overture was by an incredibly musically gifted youth of 17, and the incidental music was by the music director of Prussia's King Friedrich Wilhelm IV's Academy of the Arts and the Leipzig Gewandhaus Orchestra.

A Midsummer Night's Dream had always been a favorite of Felix and his sister, Fanny. The commission for the remaining music came from the King, for a Potsdam production of the play, one of several commissions for theatrical music Mendelssohn received while in this post. The producer of the play was Ludwig Tieck, one of the translators of the definitive German version of the play, the same version that the Mendelssohns had enjoyed and absorbed thoroughly as their own.

The incidental music consists of 14 sections, including the overture. There are vocal sections and instrumental movements. The vocal selections include the song "Ye spotted snakes" and the melodramas "Over hill, over dale," "The Spells," "What hempen homespuns," and "The Removal of the Spells." The melodramas served to enhance Shakespeare's text. The remaining sections are primarily cues. The music combines the traditional forms and structures of Classical music with the feeling and expression of the Romantic era. Throughout the sections, Mendelssohn sprinkles themes and motives pulled from the earlier overture to create coherence.

The instrumental movements, Scherzo, Intermezzo, Notturno, and the "Wedding March," are usually excerpted with the overture for orchestral concert performance. The Scherzo in its original orchestration appropriately introduces the fairy-world of Act II with rapid, running passages in the woodwinds, similar to the string passage in the opening of the overture, both set in a minor mode. The rest of the orchestra joins the woodwinds in a Classical sonata-form movement. Several small motives are repeated, up and down, then down and up the scale, to form the development section.

Although some consider Mendelssohn's work to be lightweight and uninspired, the entirety of A Midsummer Night's Dream proves otherwise in its inventiveness in reviving his older material and in its expression.

This piece was arranged specifically for the string orchestra I played in, and as such all the parts (except for the single bass line) are divided by three, the top line is usually divisi by the two players and the bottom line was for the third player in the second desk. Who knows, there may be a string orchestra out there with a similar configuration, and if so - enjoy!