By: Malcolm Dedman
For: String quartet
This music is in your basket
View basket
Loading... 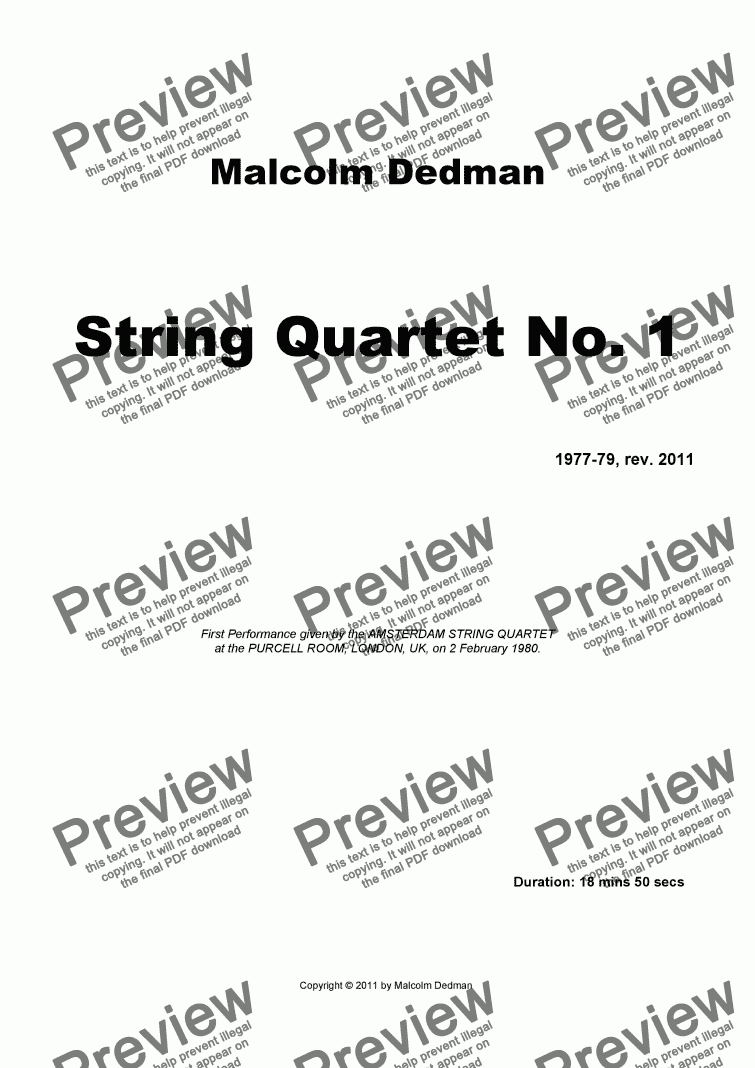 By: Malcolm Dedman
For: String quartet

Composer
Malcolm Dedman
Year of composition
1979
Publisher
Misty Mountain Music
Difficulty
Difficult (Grades 7+)
Duration
19 minutes
Genre
Modern classical music
License details
For anything not permitted by the above licence then you should contact the publisher first to obtain permission.

This String Quartet was originally written between 1977 and 1979 and finally revised in 2011. It was first performed in the original version by the Amsterdam String Quartet in the Purcell Room, London in February 1980.

It is in four movements that play without a break, and lasts just under twenty minutes. The music contrasts the struggles of everyday existence with a search for a more harmonious life. Although starting calmly, the first movement is mainly agitato in nature with a violent outburst that interrupts the flow. This outburst appears at the end of the movement which leads into the second movement, an Adagio. This movement, at first, appears to be searching for a peaceful outcome, but is not the ultimate solution. An extended version of the violent outburst from the first movement abruptly interrupts any sense of calm at the end, and leads into a statement of the theme to be used in the third movement.

The third movement is a fast dance-like theme with variations, with development of ideas from the previous movements. In particular, the movement becomes more stressed as it develops and leads naturally to a much more extended version of the violent outburst, before a return to the music of the second movement. The violent phrases are not far away and the movement ends with the final version of the outburst, even more extended and more terrifying.

This is immediately broken by calm as it leads into the final movement via a single long held note. This movement, marked Lento, expresses the final goal for the work, total peace and calm. It uses a kind of choral with a pizzicato cello line. Slow but ornate phases appear at first in the viola, and later in the cello, and the work ends on a single long held chord that expresses the ultimate goal of stillness and calm.

Reviews of String Quartet No. 1