By: MICHAEL DREWES
For: Choir
This music is in your basket
View basket
Loading... 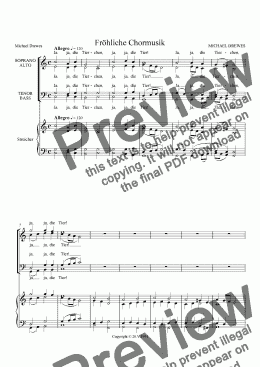 By: MICHAEL DREWES
For: Choir

I composed this piece in order to explain the thematic structure of the Sonata form to children in a manner easy to understand. In order to identify the themes in an easier way, I gave them nonsensical texts, which I do very often for retaining musical ideas in my memory if I am not able to write them down immediately.

Purely instrumental passages are modulating connection bars or codas. I avoided harmonic and rhythmic complications on purpose, and kept the duration relatively short. After all, it should not end up in a choir symphony by Mahler, and furthermore, I did not want to overly exert the listeners’ attention span. It would be advisable to have the themes sung by the sopranos during an introductory explanation before a performance.

Theme I in the tonic (C major) is: „Ja, ja, die Tierchen, ja, ja, die Tier.“ (“Yes, yes, the creatures, yes, yes, the beasts.”) Theme II in the dominant (G major) reads: „Ei, mein Känguru, ei, mein Känguruchen.“ (“Oh, my kangaroo, oh, my little kangaroo.”) Theme III in the median (A minor) comes only once as a tourist for a visit, and its text is: „Keines meiner Entchen schwimmt jetzt auf dem See.“ (“None of my little ducks swim now on the lake”), a change into the negative and into a minor tune, changed further to my own taste, as opposed to the known children’s song „Alle meine Entchen schwimmen auf dem See.“ (“All my little ducks swim on the lake.”), in order to circumvent copyright conflicts. Themes I and III are clearly periods of eight bars.

In a certain sense, the Sonata form has similarities with English composition, which is subdivided as introduction, development and conclusions.

The work begins with theme I (bars 1-8), presented by the choir and the strings, followed by a modulating connection (bars 9-16) to G major, the dominant, to theme II (bars 17-28) and an instrumental coda (bars 29-38), which ends this presentation of themes, which is repeated. That would correspond approximately to the introduction in English composition, where the arguments are presented. Visually, this presentation of themes ends in the score at the repetition sign.

Here the composer must show what s/he is able to do with the themes presented. Theme I (bars 43-50) opens the development after a short transition, no longer in its original form but in an inversion, followed by instrumental modulating bars, after which theme II enters, sung by the choir as a four-part fugue (bars 57-69). Then the strings lead to theme III (bars 77-84), so that it would not appear as an unannounced visit. The instruments then see it off politely (bars 85-94), and since we are already in a minor tone, theme II presents itself in this mode (bars 95-102); that is, E minor as a parallel to G major, in which it appeared first (bars 104-115). After three transition bars, theme II leaves the development section in a retrograde fugue (bars 119-131).

The development section of the Sonata form is like that in English composition: Here, the arguments are played one against another and varied. It should be longer than the presentation of themes and the Reprise.

Reprise or Retaking the Themes