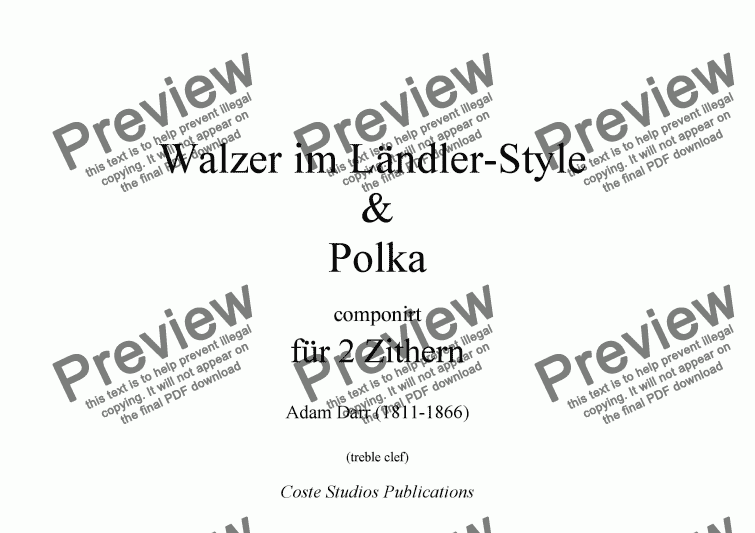 Another zither duet that hasn't see the light of day since 1864. First published by Hoenes in that year, and to my knowledge never published again. I get the feeling that this was perhaps a utility work. By that I mean, at least to me, that this was a work that was written for the express purpose of dancing. How does one tell? I'm not sure. It is very strait-forward in it's style. As always a lot of fun.

Zither players ought to be aware that the tuning of Darr's zither differs from today's modern instrument. For a historically accurate performance, string #10 must be tuned an octave higher, while strings # 17, 19, and 22 must be tuned an octave lower than today's tuning standard. In an effort to bring clarity and brevity to the notation, I have used notational conventions commonly used by the guitar today. The fretboard strings are designated with Arabic numerals inside of a circle and orders from the highest string (a) number 1to the lowest string © number 5. Harmonics are designated with diamond note heads at pitch, with a string number and roman numerals to indicate the fret number. Although this is a departure from past zither notation practices, I believe it adds clarity and a certain amount of uniformity with modern instrument notation.

Zither I and Zither II

Zither I and Zither II