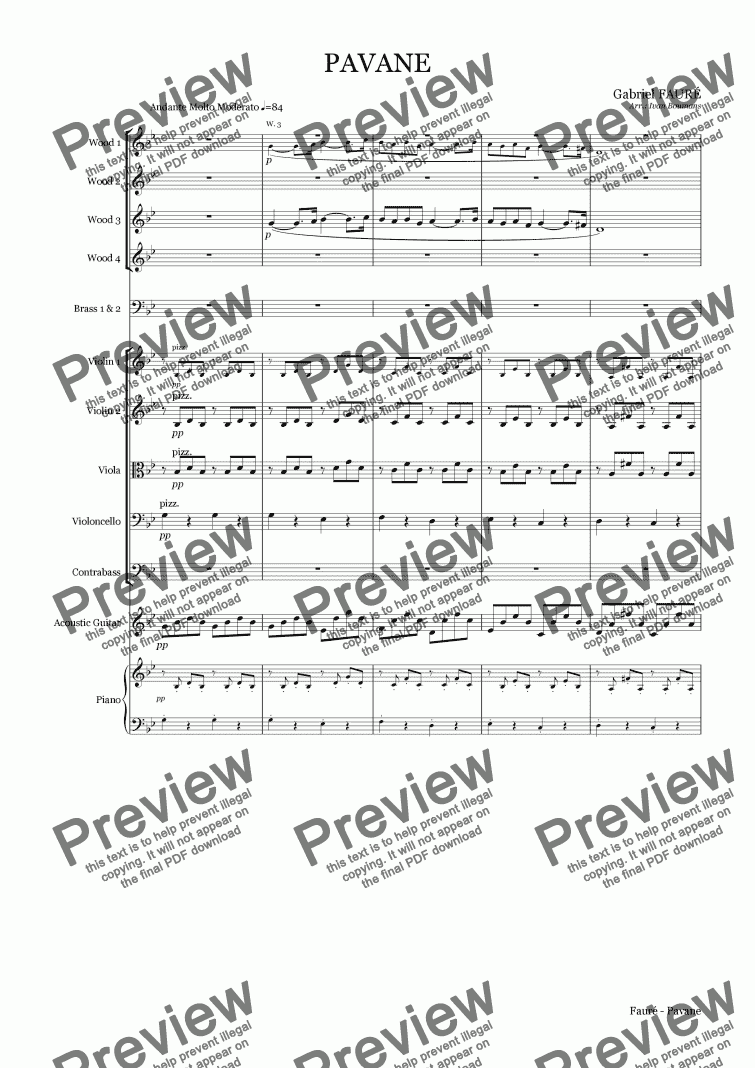 When Fauré began work on the Pavane, he envisaged a purely orchestral work to be played at a series of light summer concerts conducted by Jules Danbé. After Fauré opted to dedicate the work to his patron, Elisabeth, comtesse Greffulhe, he felt compelled to stage a grander affair and at her recommendation he added an invisible chorus to accompany the orchestra (with additional allowance for dancers). The choral lyrics were based on some inconsequential verses, à la Verlaine, on the romantic helplessness of man, which had been contributed by the Countess’ cousin, Robert de Montesquiou-Fezensac.

The orchestral version was first performed at a Concert Lamoureux under the baton of Charles Lamoureux on November 25, 1888. Three days later, the choral version was premiered at a concert of the Société Nationale de Musique. In 1891, the Countess finally helped Fauré produce the version with both dancers and chorus, in a "choreographic spectacle" designed to grace one of her garden parties in the Bois de Boulogne.

From the outset, the Pavane has enjoyed immense popularity, whether with or without chorus. It entered the standard repertoire of the Ballets Russes in 1917, where it was alternatively billed as Las Mininas or Les Jardins d’Aranjuez. Fauré’s example was imitated by his juniors, who went on to write pavanes of their own: Ravel’s Pavane pour une infante défunte and Debussy’s Passepied from his Suite bergamasque.

In order to submit this score to ScoreExchange.com Ivan Boumans has declared that they own the copyright to this work in its entirety or that they have been granted permission from the copyright holder to use their work. If you believe that this score should be not available here because it infringes your or someone elses copyright, please report this score using the copyright abuse form.

Reviews of Pavane (for "Pocket" Orchestra)