By: Henry Purcell
For: String orchestra
This music is in your basket
View basket
Loading... 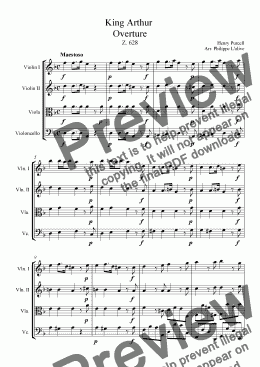 By: Henry Purcell
For: String orchestra

Composer
Henry Purcell
Year of composition
1691
Arranger
Philippe l'olive
Year of arrangement
2011
Difficulty
Moderate (Grades 4-6)
Duration
2 minutes
Genre
Classical music
License details
For anything not permitted by the above licence then you should contact the publisher first to obtain permission.

King Arthur or, The British Worthy (Z. 628), is a semi-opera in five acts with music by Henry Purcell and a libretto by John Dryden. It was first performed at the Queen's Theatre, Dorset Garden, London, in late May or early June 1691.

The plot is based on the battles between King Arthur's Britons and the Saxons, rather than the legends of Camelot (although Merlin does make an appearance). It is a Restoration spectacular, including such supernatural characters as Cupid and Venus plus references to the Germanic gods of the Saxons, Woden, Thor, and Freya. The tale centres on Arthur's endeavours to recover his fiancée, the blind Cornish Princess Emmeline, who has been abducted by his arch-enemy, the Saxon King Oswald of Kent.

King Arthur is a "dramatick opera" or semi-opera: the principal characters do not sing, except if they are supernatural, pastoral or - in the case of Comus and the popular Your hay it is mow'd - drunk. Secondary characters sing to them, usually as diegetic entertainment, but in Act 4 and parts of Act 2, as supernatural beckonings. The singing in Act 1 is religious observance by the Saxons, ending with their heroic afterlife in Valhalla. The protagonists are actors, as a great deal of King Arthur consists of spoken text. This was normal practice in 17th century English opera. King Arthur contains some of Purcell's most lyrical music, much of it inspired by French dance rhythms and adventurous (for the day) harmonies.

Lacrimosa from Requiem in Dminor

Sorry, there's no reviews of this score yet. Please .
In order to submit this score to ScoreExchange.com Philippe l'olive has declared that they own the copyright to this work in its entirety or that they have been granted permission from the copyright holder to use their work. If you believe that this score should be not available here because it infringes your or someone elses copyright, please report this score using the copyright abuse form.