Sign in / Register
HomeInstrumentationsLarge mixed ensembleEarth; The Harbinger of Life

Earth; The Harbinger of Life 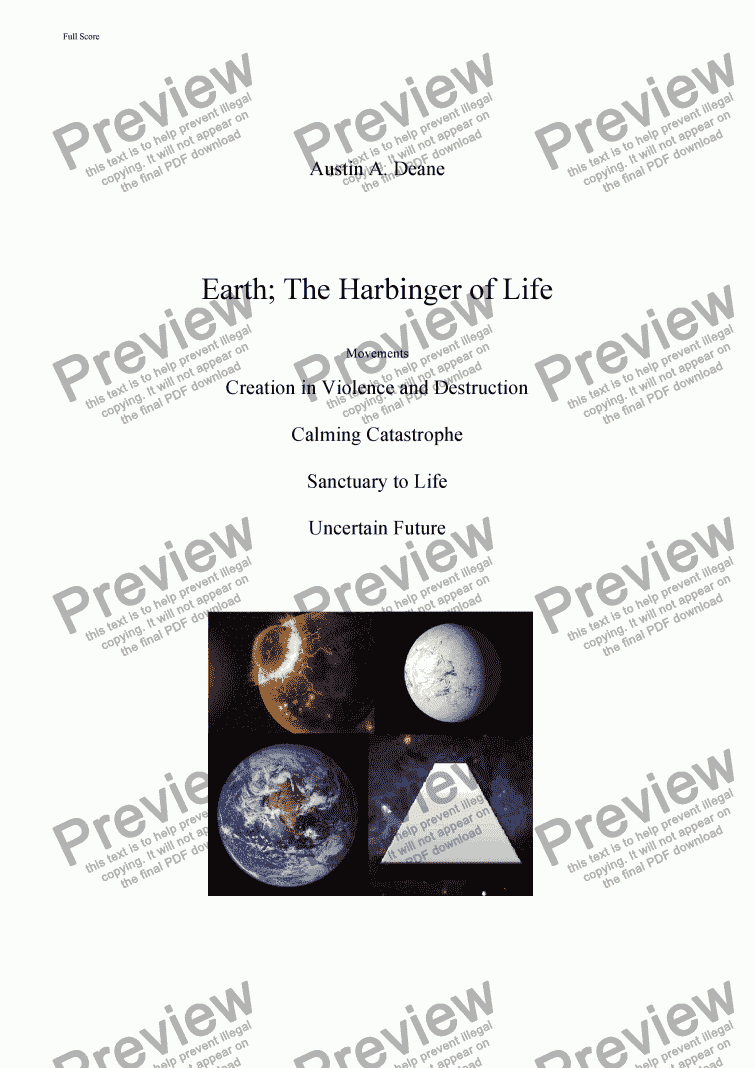 This is my first full band piece, and I think I did a very good job, given that my last piece before this was a brass quintet. My inspiration for this piece was, get this, Earth. Hence the title "Earth; The Harbinger of Life". The movements I feel are kind of self explanatory, but I will explain part of it. The first movement is based off of Earth’s violent and destructive creation, and it also has a small part, right before the slightly brighter, but still menacing, end, that is supposed to represent the creation of Luna (the Moon). The second movement is based off of the time where… What ever those scientist people are called in this specific field… The Earth was believed to be entirely covered in ice shortly after its creation. As this movement progresses, the string base plays a "solo", then some of the upper wood winds mirror it slightly. They then play what they just played together. After, the tuba comes in and plays a similar theme, but instead with triplet eighth notes. After, all instruments come in, playing in perfect octaves, the triplet eighth notes replaced with a 16th-16th-8th note rhythm. As it progresses, they stop playing in octaves, instead playing harsh chords. This progression from quiet, to "thunderous" to "thunderous" and harsh, represents volcanoes that begin to erupt, slowly causing the ice to melt. Throughout almost the entire 2nd movement, the percussion are also playing 8 specific chords. With bows instead of mallets. The desired effect from bowing the instruments instead of hitting them is one that represents Sols (the Suns) rays reflecting off of Earth’s ice covered surface. The third movement is very self explanatory. The third movement is attaca to the fourth and final movement. In this final movement, there is no percussion. The reason is that I feel that percussion can add undesired themes/feelings to something that is relatively "theme-less". While not entirely without a theme, it does represent that we have no idea what the future holds.

As with all of my pieces, feel free to review/critique this piece. I can’t improve without knowing ways in which I can improve.

Just to note, what you see on this site is by no means the final version of this piece. It is kind of the "template" for how I'm going to modify it and improve upon it greatly. That being said, I don't think that the 2nd movement will change much, if at all because of how dramatic it is. It goes from a few instruments playing a similar part. Then the tuba comes in and changes it up slightly. Then every single wind (and stringed) instrument comes in, and plays the same rhythm as the first instruments, but with very similar intervals to what the tuba was playing. All in perfect octaves on top of each other. This gives for an extremely dramatic effect. And when all the instruments suddenly change the rhythm up slightly, they also all begin to play one chord. A chord that is harsh and fitting for what the piece represents. The Mystic Chord. Then comes the Dream Chord (an Asian one I discovered on Wikipedia (it really is more reliable than you think)). With it, a return of a certain familiar rhythm from the first movement. I also don't think that I will change the fourth movement a great deal. I love the simplicity of it. I also love the end of it. A very dissonant chord. To imply uncertainty, and wanting more, a feeling of not understanding the end. Is it supposed to end that way? What does it mean? Not necessarily questions everyone would ask, but that is the point of the last movement. Uncertainty.

In order to submit this score to ScoreExchange.com Austin Deane has declared that they own the copyright to this work in its entirety or that they have been granted permission from the copyright holder to use their work. If you believe that this score should be not available here because it infringes your or someone elses copyright, please report this score using the copyright abuse form.

Reviews of Earth; The Harbinger of Life