The Battle of New Hope

By: Francesco Zanellato
For: Orchestra
This music is in your basket
View basket
Loading... 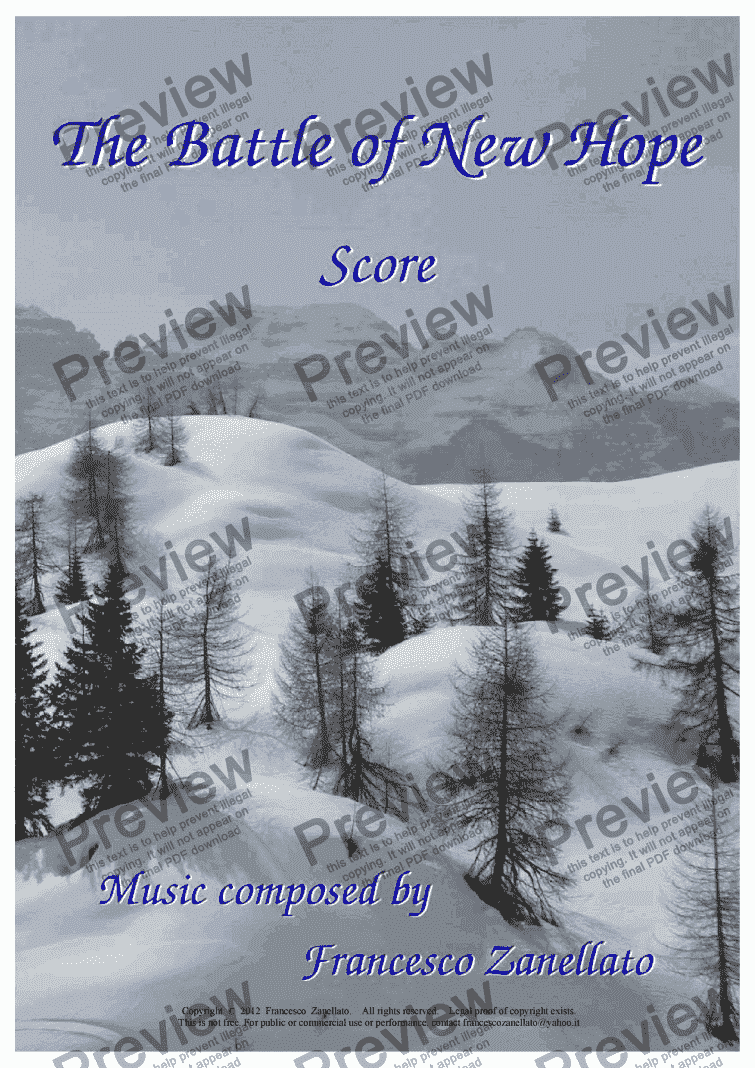 The Battle of New Hope

By: Francesco Zanellato
For: Orchestra

Composer
Francesco Zanellato
Year of composition
2012
Arranger
Francesco Zanellato
Difficulty
Moderate (Grades 4-6)
Duration
6 minutes
Genre
Rock and Pop music and Modern classical music
License details
For anything not permitted by the above licence then you should contact the publisher first to obtain permission.

Listen freely to this song at: https://play.spotify.com/album/0TcWQb6TpFhIW6LKheTaoK

But if you look a little closer, you will discover something unusual in the ranks…

Here is "The Battle of New Hope", the complete score of my new orchestral work!

Use your fantasy to imagine all the characters of the battle while you listen at the foreground themes and background music!

The single is available on the main digital music online stores.

Please find here attached the MP3 preview of the work.

THE GENESIS OF THE MUSIC.

Having spent so much time listening to music from John Williams and Hans Zimmer, from the epic themes of “Star Wars” to the great ones of “Pirates of the Caribbean”, one day I said to myself “I also want to create something I would like to listen to!”.

The inspiration was John’s and Hans’ music and the goal was to create music consisting entirely of “meaningful” parts, without any “filler” or repetition, which are needed in soundtrack music to follow the development of the images, but that may affect the general “sound performance” when the music is listened alone, without any “visual help”.

So, the goal was also to create some sort of “soundtrack music without a movie”, to be only enjoyed through imagination, without the help of any visual art.

Therefore, I will not tell you what I had in mind when I wrote every single second of the score!

There is a “musical climax” at about minute 4:00, where the flutes, oboes and harp leave the scene and strings come in. This is an “experiment”: the goal is to create a moment in which, after some sort of quiet anticipation, the listener is taken by a sudden back shiver of emotion. The experiment will succeed if You will feel that shiver too!

This music is definable as “a programma” music and describes a battle on an ice planet. The title is inspired to the well known “The Battle of” songs of the Star Wars soundtracks and the planet New Hope may seem inspired to “Episode IV – A New Hope”. I will never know if this was a conscious citation…

However, the music is entirely original and I written it “from scratch”.

This should have been a suite containing themes of different characters and situations. Then, I would have written additional tracks with the development of each theme. But, for now, this is it, and “The Battle of New Hope” must be considered a complete single work.

Since I don’t have a good hi-fi system, I think that the best way for me to listen to music is through earphones.

Then, if you know music writing, you should have the relevant sheet music at hand. You can view the sheet music for “The Battle of New Hope” right here at scoreexchange:

A 2-minute MP3 preview of the song is also available on this page.

The best thing I can think of, about “The Battle of New Hope” is that I would like to hear it in a live orchestral performance, so, if you have an orchestra at hand, I would be glad to offer you a “performing license” for free!

I plan to release a 5-minute soundtrack inspired by a short movie by a friend of mine, but the short is currently work in progress, so I will let you know as soon as possible! Then I will release some orchestral music for free, although this is still at an early stage of development, since it takes about three months for me to “fine tune” a song: if a part doesn’t sound good, I will simply change it, again and again.

End Titles of a Rock Dream, Lights and Shades at an Exhibition, Landing on Vega and Beethoven - Grande Sonate Op. 53 ("Waldstein")

Reviews of The Battle of New Hope

Sorry, there's no reviews of this score yet. Please .
In order to submit this score to ScoreExchange.com Francesco Zanellato has declared that they own the copyright to this work in its entirety or that they have been granted permission from the copyright holder to use their work. If you believe that this score should be not available here because it infringes your or someone elses copyright, please report this score using the copyright abuse form.