Piano Sonata No.1 in F-major 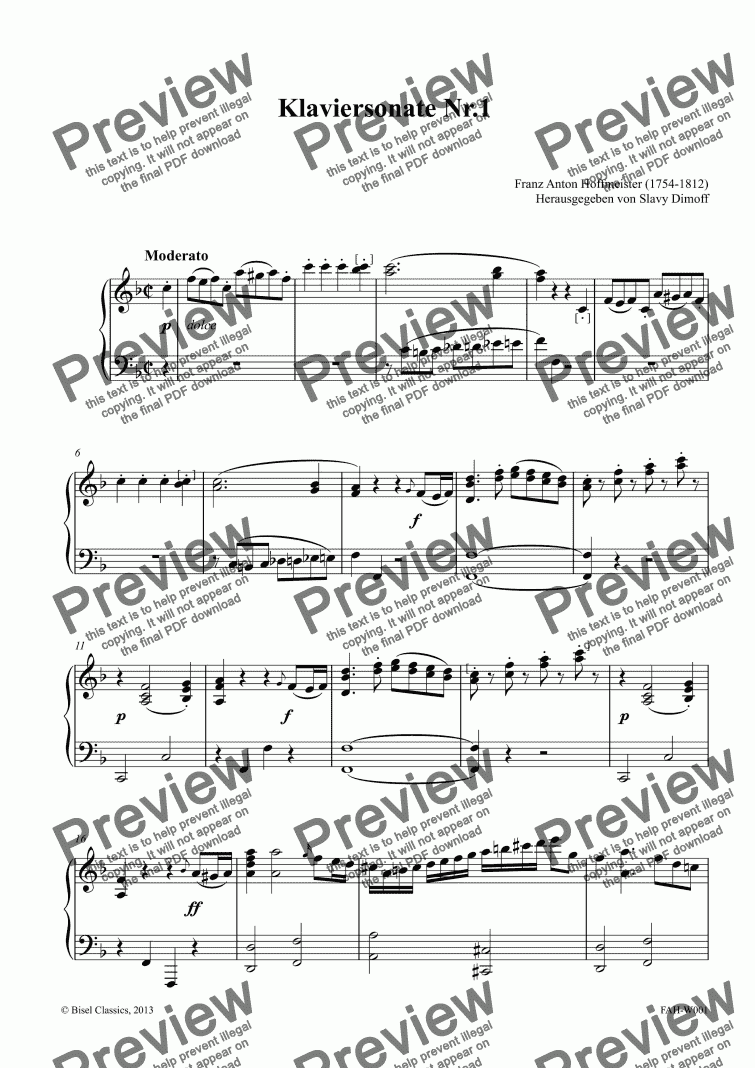 Piano Sonata No.1 in F-major

Franz Anton Hoffmeister spent his childhood in Rottenburg am Neckar. In 1768, at the age of 14, he felt drawn towards the musical capital Vienna, yet not planning to study music, but law. Soon he devoted himself entirely to music and made a living as a director of music at a church. The decision to found his own music publishing business in 1784 marked a crucial turn in his life. By casting a glance at the history of music publishing in Vienna, this step evidently reveals itself as a bold one. Previously the publication of music had been handled by custom book printers, and it was only Antoine Huberty, who, coming from Paris, the second eminent music capital in those days, brought the new specialized business branch of publishing music to Vienna. 1778 marks the foundation of the publishing house Artaria that monopolized the market for quite a while, until Hoffmeister dared to break that monopoly by founding his publishing house in 1784. Those were the days when he enjoyed a close friendship with young Mozart. It was in the name of that friendship that Hoffmeister became the publisher of many compositions of Mozart. The fact that he was the first to publish Mozart`s piano quartet KV 478 shows his excellent taste and courage. Hoffmeister, seeing his business endeavors rewarded by success, was able to help Mozart out of his financial problems quite often. Out of thankfulness Mozart dedicated his “Hoffmeister Quartet” KV 499 in D-major to his friend and sponsor in 1786. But there were other Mozart publications that did not bring along commercial success. Landing a business success as a music publisher was definitely not any easier in those days than it is today, as the deal included being profitable by successfully identifying and developing marketing opportunities of a newborn business. It also meant walking the thin line between trying to satisfy the tastes of well-funded customers and at the same time giving value to cutting-edge developments of leading artists and mavericks like Mozart and Beethoven.

Out of this same necessity Hoffmeister developed one of the strengths he is known for and that made him popular outside of the German-speaking area; he started composing, and deliberately used a part of his creativeness to fulfill his clients’ desire for “light musical fare”. Yet he never turned into a mere “servant of his market” and did in fact create numerous compositions of considerable artistic value, that are today in the process of being reappraised. The popular works in those days were chamber music, trios and duos, where Hoffmeister`s fondness for the flute becomes evident. The 30 concertos for flute and further 21 concertos for various instruments (including double bass, viola and shawm) may be emphasized out of the surprisingly high number of his published compositions (510). The present sonatas are part of his rather small oeuvre for piano solo, and can clearly be classified as high quality functional compositions. This assumption becomes evident due to the fact that the pieces offer a high playability; both sonatas No 1 and No. 2 were composed by Hoffmeister, keeping in mind his most important customers, musical amateurs in the full sense of the word. We are envisioning pianists who were hoping to find not too many technical difficulties, yet a little amusement and merry, pleasing melodies, maybe a trifle of self-affirmation and a proper amount of challenge, all neatly packed in a sonata. Both sonatas promptly dispose of all those components, and were maybe part of the large-scale business master plan, that Hoffmeister had envisioned in 1785 by creating his subscription program. The monthly subscriptions were planned to provide music lovers with “new and original” music composed for the occasion, and meant to encourage the creation of private music libraries. The marketing strategy that next to compositions of Haydn, Mozart, Albrechtsberger and Pleyel included his own compositions became a huge success. The year of creation of the present sonatas, 1787, can be classified as a highly successful phase in Hoffmeister`s career as a publisher and composer. In the same year Mozart had to lament the death of his father Leopold, had his “Don Giovanni” first performed in Prague, and composed 11 songs in between the 18th of May and 24th of June. Nevertheless he was encountering major financial shortcomings, and we feel more than grateful, that indirectly his patron`s publications of pianistic functional literature were there to come to his rescue. Adding another highlight to the special quality of the year 1787, it may be added that Beethoven came to Vienna as a promising young musician, and is said to have played for Mozart. He had lost his mother and sister in the same year.

The Sonata Nr.1 in F-major with the movements Moderato, Adagio and Allegretto convinces by way of its fluent style and eloquence. Despite its high playability the diction never risks falling into triteness and remains tasteful and pleasing throughout; another indication of Hoffmeister’s qualities as a composer, for it is a well-known fact that light entertainment is a true art. The Sonata No. 2 in B flat major with the movements Allegro, Adagio and Allegro presents itself as a beautiful practice piece as well, and is highly recommendable for use in the classroom. It sure adds a fresh flavor to the well-known and often played standards of intermediate pieces of the First Viennese School.

Piano Sonata No.2 in B flat major

Reviews of Piano Sonata No.1 in F-major