By: August A. Klengel (1783 - 1852) Herausgegeben von Slavy Dimoff
For: Solo instrument (Piano)
This music is in your basket
View basket
Loading... 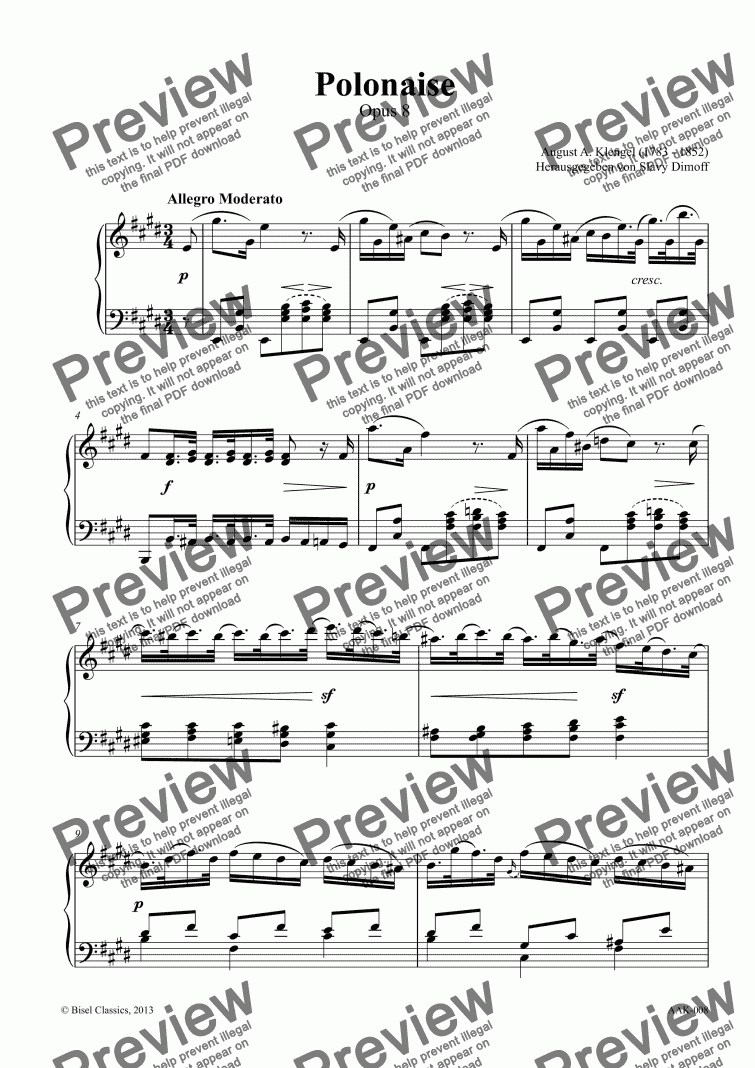 Composer
August A. Klengel (1783 - 1852) Herausgegeben von Slavy Dimoff
Publisher
Bisel Classics
Difficulty
Moderate (Grades 4-6)
Duration
3 minutes
Genre
Classical music
License details
For anything not permitted by the above licence then you should contact the publisher first to obtain permission.

August Alexander Klengel was a son of the town of Dresden, who deserves to be remembered as an exceptional pianist, organist and composer. He started his career as a musician at a very young age, studying with Johann Peter Milchmeyer. At this point it is worth mentioning the pedagogically interesting piano method written by Milchmeyer: "Die wahre Art das Klavier zu spielen" (Dresden 1797), which was designed to encourage private study and also contained valuable suggestions for young piano teachers. It was the visit of Muzio Clementi that led to a fateful change in the life of the young artist, which until then had been rather settled. Over the two years that followed, Klengel became the faithful travel companion of the renowned pedagogue. Those intense years of travel and study alongside the great composer, publisher and piano manufacturer must have been immensely precious. Not only did he get to know Clementi’s master-class student, Ludwig Berger, but was able to gain intrinsic knowledge about cutting-edge developments in the music world of his time, which contributed immensely to his artistic formation as a composer. Yet in 1805, Klengel decided to branch out independently and stayed in St. Petersburg for the following six years, making his living primarily by giving piano lessons. In 1811 he left for Paris, where due to the tense political situation, the time of his stay was limited. He spent the year of 1813 in the more peaceful Italy, and continued his travels (after a brief period in Dresden in 1814) in England until 1816. After those formative years of travel as a renowned concert pianist, Klengel returned to his hometown of Dresden, where he was rewarded with a secure position as organist at the Royal Saxon Court. He gradually withdrew from concert life and devoted himself entirely to music, composition and playing the organ as part of his job.

Bearing in mind the rather meagre details that have been handed down to us about the personal circumstances of his life and social affairs, and trying to relate this lack of information to the quality of his compositions that have been preserved to the present day, the clear image of a very modest artist of immense quality emerges. Standing in the limelight as a celebrity, and striving for credibility by the masses, was certainly of minimal importance for the artistic self-conception of Klengel. But when it came to interpreting a complex polyphonic work of J.S. Bach in perfect balance, Klengel must have been so utterly satisfied and in harmony with his music, that it was probably immaterial to him whether he played in public or totally alone. Characteristic of his desire to achieve great things quietly, Klengel would always carry his life`s work, “Canons et Fugues dans tout les tons majeurs et mineurs pour le Piano", with him wherever he travelled, and worked continually to improve it. It was his way of paying homage to "Wohltemperiertes Clavier" by his idol Joh. Seb. Bach and he clearly succeeded in transforming the work of the master.

[ quote no. 1 translated by the author] "…Where the friends who got a chance to learn about his compositions kept admiring perfection, he, who was always going deeper and trying to grasp the entity of a work by viewing its miniature details, was still not satisfied and wouldn`t give up amending and polishing, until anything artificial was completely cleared, and transformed into natural expression. K. was nurtured by Bach and was shaped by fundamental knowledge of his works. But he definitely achieved more than just producing a composition in the manner of Bach; he was able to express his personal feelings in the style of Bach’s composition and genre and does so not in an antiquated fashion, but by using the language of our times.”

These empathetic quotes by his friend and publisher Moritz Hauptmann refer to Klengel`s approach to life and work, and offer a glimpse of the positive reception by his contemporaries. The fact that almost his entire work has fallen into oblivion stems from the rather human tendency to be more attracted to the loud and flashy than to the quiet and unpretentious. With the new edition of the Polonaise in E major Op. 8, Bisel Classics invites us to appreciate one of Klengel`s early works. This beautifully light-footed piece with its remarkable dancing dotted rhythmical sequences was composed around the year 1810, so, we may assume, shortly before Klengel left for Paris, or more logically, 1811 in Paris. The relation to the dedicatee remains for us an unsolved riddle. The Polonaise may have been a commissioned work. Madame Lucy de la Tour du Pin (1770-1853) had become lady-in-waiting to Marie Antoinette at the early age of sixteen, and was one of the grand personalities at the French court. By writing her memoires in the form of letters (officially only about 10 years after the dedication) she painted a realistic picture of the incidents in France at the time of the Ancien Regime, during the Revolution period and the Era of Napoleon. The Polonaise Op. 8 is definitely to be counted among the rare jewels of romantic piano music that deserve to shine in a new setting.