Original Version for Cello and Piano 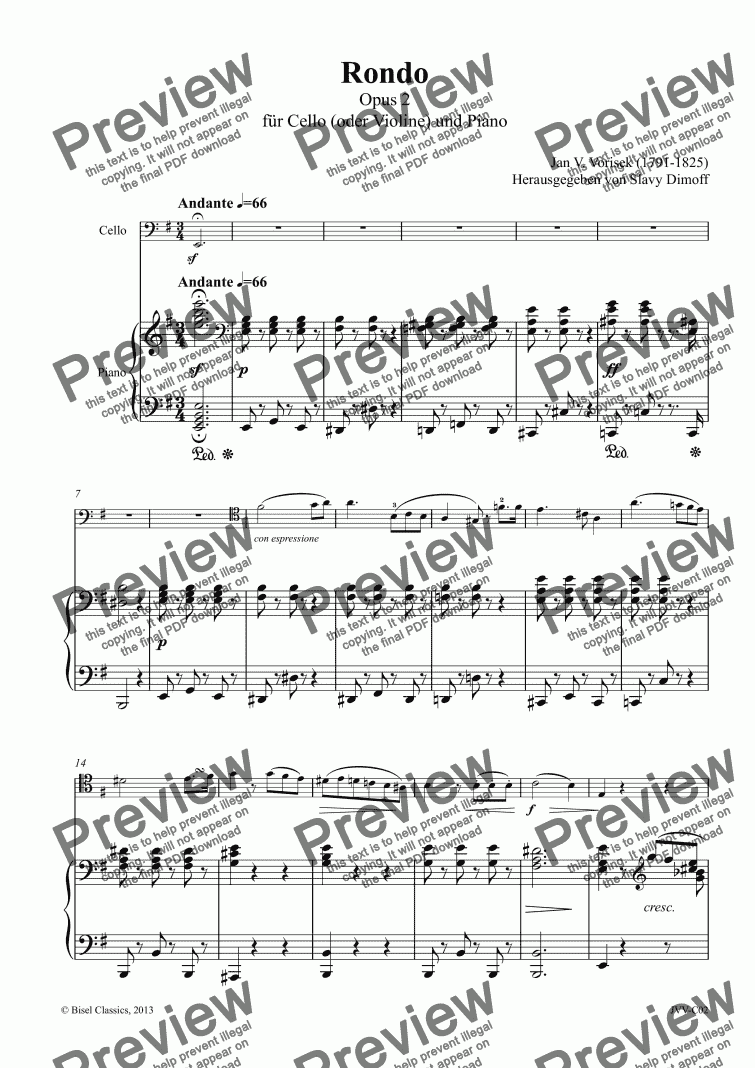 Original Version for Cello and Piano

The child prodigy Jan Vaclav Hugo Vorisek wrote his first composition at the early age of ten, and had also already given public concerts with considerable success. Despite the support of his father (or more likely, because of the notion that it was necessary to learn a proper profession to earn a living), his educational career wasn’t focused exclusively on the field of music. At the age of fifteen, the gifted young man was sent to Prague to study not music, but philosophy (1810 – 1813). Judging from the enthusiasm that Vorišek’s compositions and virtuosity at the piano aroused in the renowned teacher Tomašek, the piano lessons he took with him over a period of one year must have been of major importance to Vorišek. All we know for sure is that just three years later, he fulfilled his wish to move to Vienna, at that time a veritable Mecca for music culture. His artistic endeavors were accompanied by law studies, which he was able to complete within eight years while expanding his career as a musician in every possible direction. He was living at the height of the development today referred to as the "First Viennese School" and amidst the awakening spirit of early romanticism; for a talented aspiring musician and composer, it was certainly the right place and the right time.

The artistic atmosphere of Vienna in those days was like a greenhouse for creativity and productivity. Chamber music was a common fixture in the music salons of the middle class, and patrons from the aristocracy and nobility, as well as wealthy members of the bourgeoisie, supported artists and events. Vorišek was an active member of many music-oriented societies and did a lot of volunteer work, for example at the newly founded "Musikverein" (founded in 1812 by Joseph Sonnleithner), also known as the “Gesellschaft der Musikfreunde,” or the "Society of Friends of Music” in Vienna. Outside of his duties as a law student he must have had a busy life. Additionally, he had inherited all the pupils of his piano teacher Johann Nepomuk Hummel in 1816 when Hummel left for Stuttgart. In the year of 1819, presumably the year the Rondo was composed, Vorišek had just managed to work his way up from repetiteur to first conductor at the Vienna Musikverein (in those days still located at Palais Lobkowitz, where it was first founded). In the same year, the Vienna Conservatory was established — again thanks to the Musikverein. Soon after (in 1821), Vorisek completed his law studies and attained a position as barrister to the Court Military Privy Councillor. In 1823 his dream to become court organist was fulfilled, and in 1824 he was awarded the position of first organist at the royal court. Given this remarkable development and his prolific creative output of compositions — in the six years after 1819 and the Rondo opus 2, he composed another 24 works with opus numbers, and at least 30 without numbers — it seems like a cruel trick of fate that his life ended so brutally early, on the 19th of November, 1825, due to pulmonary tuberculosis.

According to common performance practice of those days, the Rondo was written with two possible instrumentations — namely, for piano and cello or violin. Both versions are available at Bisel Classics. It is safe to assume that the dedicatee of the work was the celebrated pianist Henriette Luise Ritter (1794–1874), who is remembered in the history of concert culture as one of the first successful female piano soloists, and who made a name for herself when she successfully founded her own music school at Darmstadt. The piano part of the Rondo is especially challenging, and with elaborate passagework presents a perfect opportunity to show off pianistic virtuosity. One has to imagine that this composition drove contemporary pianos to their extremes in volume and repetition capacity — one more reason why it must have moved the audiences of Vienna to enthusiastic applause. The formal aspects of the composition highlight Vorišek’s masterful musical sensibility and his craftsmanship. Even if not in the rather mechanical passagework, in the seemingly endless coda we’re reminded of the master Beethoven.

The "famous Bolero" mentioned in the dedication of course doesn’t refer to Ravel’s Bolero (firmly rooted in today’s consciousness), which was first performed in 1928. Vorišek was inspired by a composition of Professor Gaetano Piantanida of Milan (1768–1835), the pleasant aria "Son gelsomino, son piccol fiore…" for voice accompanied by piano or guitar, with its sparkling coloratura and charming youthful spirit, which had delighted audiences in music salons from Vienna to Leipzig. The musical theme is introduced, with the original performance indication "Allegretto grazioso" slightly modified into "Allegretto con gusto," at the beginning of the E-major section in the piano part, and soon begins a dialogue with the violin / cello. We found it inspiring to include the lyrics of the Italian original and the German translation; the only common element they share is the imagery of the fragrant roses. The author of the German lyrics clearly took a liberal interpretation of the Italian original; its content is limited to floral imagery and does not relate to the sorrows and delights of love like the German version. The lyrics and their German "interpretation" are surely another reason why the Bolero of Piantanida was fascinating to German-speaking audiences as well as inspiring to Vorišek.

Sorry, there's no reviews of this score yet. Please .
In order to submit this score to ScoreExchange.com Christoph Bisel has declared that they own the copyright to this work in its entirety or that they have been granted permission from the copyright holder to use their work. If you believe that this score should be not available here because it infringes your or someone elses copyright, please report this score using the copyright abuse form.