By: Composed by Frantisek Jan Skroup
For: Brass quintet
This music is in your basket
View basket
Loading... 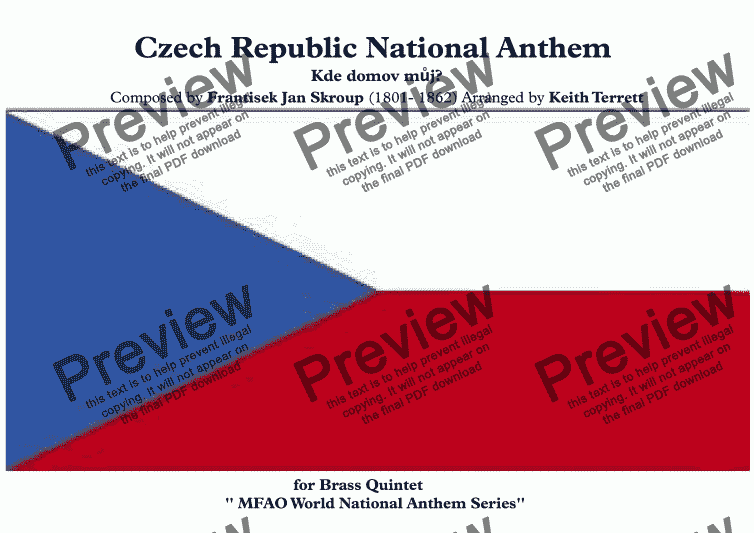 By: Composed by Frantisek Jan Skroup
For: Brass quintet

Composer
Composed by Frantisek Jan Skroup
Year of composition
1834
Arranger
Keith Terrett
Year of arrangement
2014
Publisher
Music for all Occasions
Difficulty
Moderate (Grades 4-6)
Duration
1 minute
Genre
Classical music
License details
For anything not permitted by the above licence then you should contact the publisher first to obtain permission.

An arrangement of the Czech Republic National Anthem for Brass Quintet. There are alternative versions for Symphony & String Orchestra in my stores.

The music to the anthem was composed by F. Škroup, a main Revivalist composer of Czech music and especially Czech opera. The lyrics were taken from the first stanza of the opera “Fidlovačka”, which was written by Tyl and performed in 1834. The song originally had two verses but when it became the first part of the Czechoslovak state anthem after the country’s liberation in 1918, only one verse was used. Upon dissolution of Czechoslovakia on 1 January 1993, the song became the anthem of the new Czech Republic, but only the first verse remains the official anthem.František Jan Škroup (3 June 1801, Osice near Hradec Králové – 7 February 1862, Rotterdam; Czech pronunciation: [ˈfraɲcɪʃɛk ˈjan ˈʃkroup]) was a Czech composer and conductor. His brother Jan Nepomuk Škroup was also a successful composer and his father, Dominik Škroup, and other brother Ignác Škroup were lesser known composers. At the age of eleven he moved to Prague where he supported himself as a choir boy and flautist. He continued his schooling at one of the most important Czech national revival movement centres, Hradec Králové, where he was a choirboy at the cathedral. While there he studied with the local choirmaster and composer Franz Volkert[1] (1767–1831). He later moved back to Prague to study at the university. He became a fairly successful opera and singspiel composer producing more than a dozen stage works. Among Škroup’s part-time jobs was organist at the "Temple of the Israelite Society for Regulated Worship," known since the late nineteen-forties as the "Spanish synagogue." His last position was as the musical director of the German opera in Dutch Rotterdam. He died there and, as a person without means, was buried in a mass grave. He also produced an oratorio, a mass, and a few other sacred works. He is best remembered today as the author of the melody for the Czech national anthem "Kde domov můj?". Love national anthems, then join me on twitter, facebook, instagram & soundcloud for frequent updates & news on my Olympic bid!