By: Composed by Arranged by Keith Terrett
For: Brass quintet
This music is in your basket
View basket
Loading... 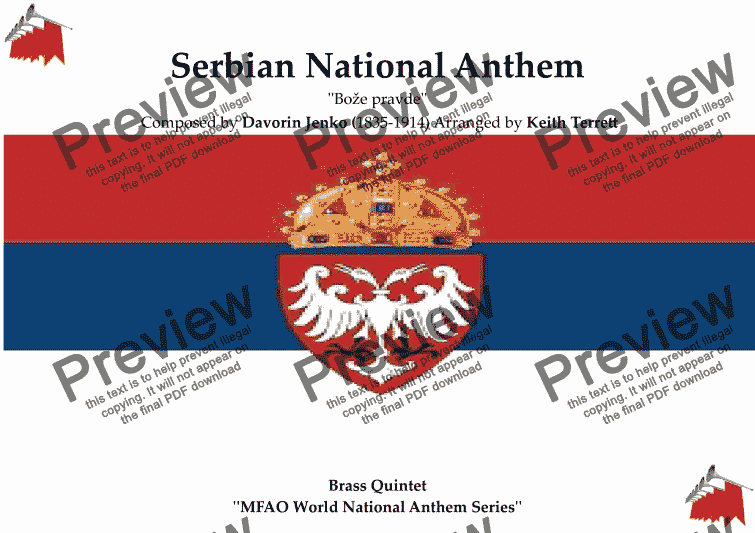 By: Composed by Arranged by Keith Terrett
For: Brass quintet

Composer
Composed by Arranged by Keith Terrett
Arranger
Keith Terrett
Publisher
Music for all Occasions
Difficulty
Moderate (Grades 4-6)
Duration
1 minute
Genre
Classical music
License details
For anything not permitted by the above licence then you should contact the publisher first to obtain permission.

Bože pravde" (Serbian Cyrillic: „Боже правде”, meaning "God of Justice" or "Lord, Give Us Justice"[citation needed]) is the official anthem of Serbia, as defined by the Article 7 of the Constitution of Serbia. "Bože pravde" was the anthem of the Principality of Serbia and Kingdom of Serbia until 1918 when Kingdom of Serbs, Croats and Slovenes was formed. It was recommended by the Parliament of Serbia on August 17, 2004 and constitutionally adopted on November 8, 2006. The recommended text was made Law on May 11, 2009. The original song was written in 1872 with music by Davorin Jenko and lyrics by Jovan Đorđević. It was then a piece for the theater play "Marko kazuje na kome je carstvo" (Marko names the Emperor), and its immense popularity with audiences prompted its adoption as the Serbian national anthem.

While being the anthem of the Kingdom of Serbia, it occasionally was referred to as ’Serbian National Prayer’ and the original lyrics contained a petition for the Serbian king. Various rulers of Serbia changed the words of the anthem to suit them. During the rule of Prince Milan I of Serbia, the words were "God, save Prince Milan" (knez Milana Bože spasi), which changed to King Milan when Serbia became a kingdom. Later the anthem was tailored to Peter I and Alexander I as well. During the time of the Kingdom of Serbs, Croats and Slovenes (later Kingdom of Yugoslavia), "Bože pravde" was part of its national anthem.

In 1992, "Vostani Serbije" and "Marš na Drinu" were proposed as the anthem of Serbia along with Bоže pravde.The latter, promulgated by then-ruling Socialist Party of Serbia, even received a plurality of popular vote on referendum, but it never got officially adopted.