The Kongensangen arranged for Brass Quintet; the royal anthem.

In the early 19th century, the anthem Norges Skaal was regarded by many as a de facto national anthem. From 1820, the anthem Norsk Nationalsang (literally, "Norwegian National Anthem") became the most recognised national anthem. It came to be known as Sønner av Norge (originally Sønner af Norge), after its first stanza. Sønner av Norge was written by Henrik Anker Bjerregaard (1792–1842) and the melody by Christian Blom (1782–1861), after Det Kongelige Selskap for Norges Vel had announced a competition to write a national anthem for Norway in 1819. Norsk Nationalsang (Sønner af Norge) was announced as the winner. Blant alle Lande (also called Nordmandssang) by Ole Vig has also been used as a national anthem. Henrik Wergeland also wrote an anthem originally titled Smaagutternes Nationalsang ("The Young Boys' National Anthem"), and commonly known as Vi ere en Nation, vi med.

Ja, vi elsker dette landet by Bjørnstjerne Bjørnson and Rikard Nordraak was written between 1859 and 1868, and gradually came to replace Sønner av Norge as the most recognised national anthem. Until the early 20th century, Sønner av Norge and Ja, vi elsker dette landet were used alongside each other, but Sønner av Norge was the anthem preferred in official settings. Since 2011, the anthem Mitt lille land by Ole Paus has additionally been referred to by the media as a "new national anthem" and notably featured most prominently in all the memorial ceremonies following the 2011 Norway attacks. On the Norwegian Constitution Day in 2012, the NRK broadcast was opened with "Mitt lille land."

In addition, Norway has an unofficial royal anthem, Kongesangen, based on God Save the King and written in its modern form by Gustav Jensen. The psalm Gud signe vårt dyre fedreland, written by Elias Blix and with a melody by Christoph Ernst Friedrich Weyse, is often referred to as Norway's "national psalm." 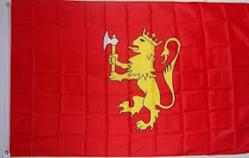