By: Composed by Tolia Nikiprowetzky (1916 - 1997) Arranged by Keith Terrett
For: Brass quintet
This music is in your basket
View basket
Loading... 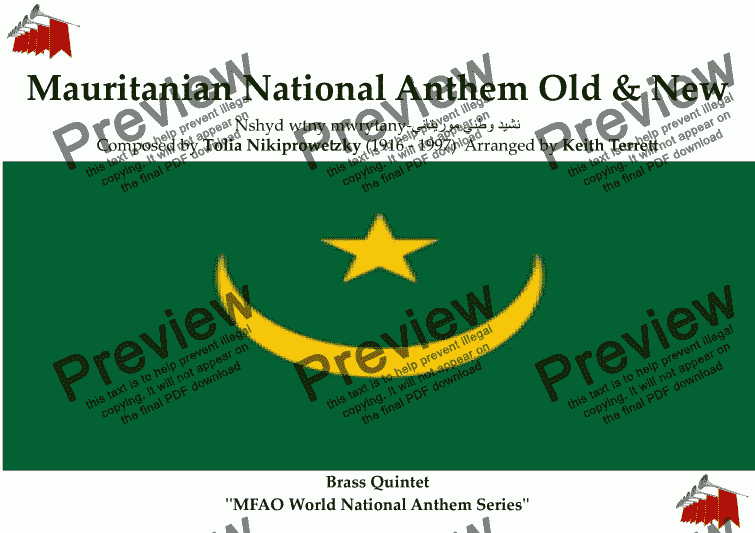 By: Composed by Tolia Nikiprowetzky (1916 - 1997) Arranged by Keith Terrett
For: Brass quintet

Composer
Composed by Tolia Nikiprowetzky (1916 - 1997) Arranged by Keith Terrett
Arranger
Keith Terrett
Publisher
Music for all Occasions
Difficulty
Easy (Grades 1-3)
Duration
1 minute
Genre
World music
License details
For anything not permitted by the above licence then you should contact the publisher first to obtain permission.

The national antherm of Mauritania arranged for Brass Quintet.

One of the more unique anthems of the world, Mauritania’s anthem is based on a late eighteenth-century poem by Baba Ould Cheikh, who was inspired to write due to the problem of the myriad of Arabian sects that were developing at the time.

The first president of the country, shortly before independence from France, asked the director of the orchestra of the French broadcasting service, Tolia Nikiprovetzki, to select a melody to be used for the future anthem. This melody, known for many centuries and was the melody that originally belonged to the verses, was selected from the many selections of folk music that were considered.

The peculiar rhythym of the anthem (known as “fatchou”) makes it very difficult to sing, thus the anthem is often (but erroneously) listed as wordless.