By: Amber Gurung Arranged by Keith Terrett
For: Brass quintet
This music is in your basket
View basket
Loading... 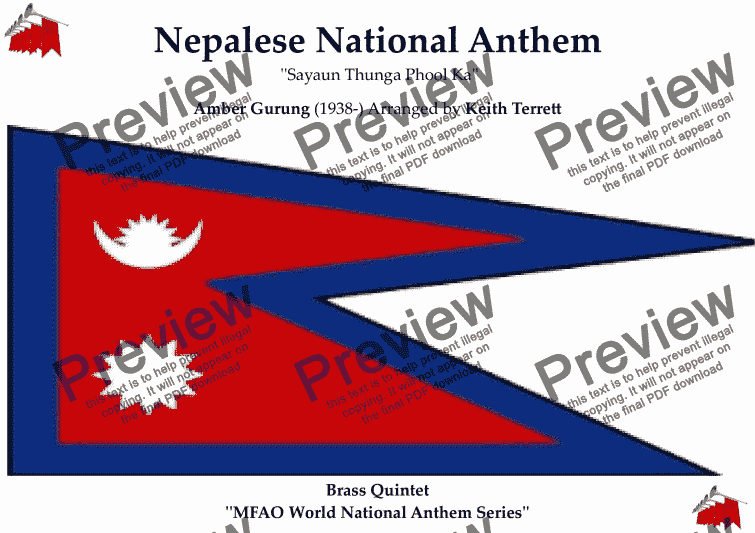 By: Amber Gurung Arranged by Keith Terrett
For: Brass quintet

Composer
Amber Gurung Arranged by Keith Terrett
Year of composition
2007
Arranger
Keith Terrett
Year of arrangement
2014
Publisher
Music for all Occasions
Difficulty
Easy (Grades 1-3)
Duration
1 minute
Genre
World music
License details
For anything not permitted by the above licence then you should contact the publisher first to obtain permission.

The previous anthem, Rastriya Gaan, had been adopted in 1962.

The following explanation is meant for capturing the true essence of the National Anthem:

"We Nepalis, from different lingual, racial, religious or cultural background are the individual flower of a whole garland of the Nepali race. We have always been sovereign and we are spread out from our territories of Mechi to Mahakali.

Blessed with Nature’s millions gifts and blessed by the blood sacrificed by our Heroes, we are independent and are immovable - standing still with pride.

Nepal - the land where knowledge shines, the peaceful nation consisting of Terai, Hills and Mountains - is indivisible. It is our beloved motherland and we shall preserve its sovereignty at any cost.

A melting pot of diverse races, numerous languages and religions, Nepal is rich in its large diverse culture. We are a progressive people of the progressive nation and we don’t look back - jai Nepal!"

Mahasangeetkar(the great musician) Amber Gurung was born in Darjeeling, India, where his father, Ujir Singh Gurung, a former soldier in the British Indian Army, was serving as a policeman from Gorkha district, Nepal. His mother encouraged him to sing and compose as a child, and he taught himself to play both Nepali, Indian and Western instruments. He studied at Turnbull School, Darjeeling, where he had fallen in love with music singing Bible hymns.

In the 1950s, one of his important associations was with the Nepali poet Agam Singh Giri. He became the headmaster of Bhanu Bhakta School founded by Giri and instituted a music school, the Art Academy of Music, in the school’s premises. He recorded his famous song “Nau Lakh Tara” (a song about the sufferings of the Nepali diaspora in India) in the early 1960s, written by Agam Singh Giri. His students at his academy included musicians and singers such as Gopal Yonzon, Karma Yonzon, Aruna Lama, Sharan Pradhan, Peter Karthak, Indra Gajmer, Jitendra Bardewa and Ranjit Gazmer. He worked as the Music Chief of Folk Entertainment Unit, Government of West Bengal, Darjeeling from 1962 to 1965. Here, he was barred from singing or recording songs outside the unit. He moved and settled to Kathmandu, Nepal in 1969.