By: John Hughes (1873-1932) Arranged by Keith Terrett
For: Quartet of Tubas
This music is in your basket
View basket
Loading... 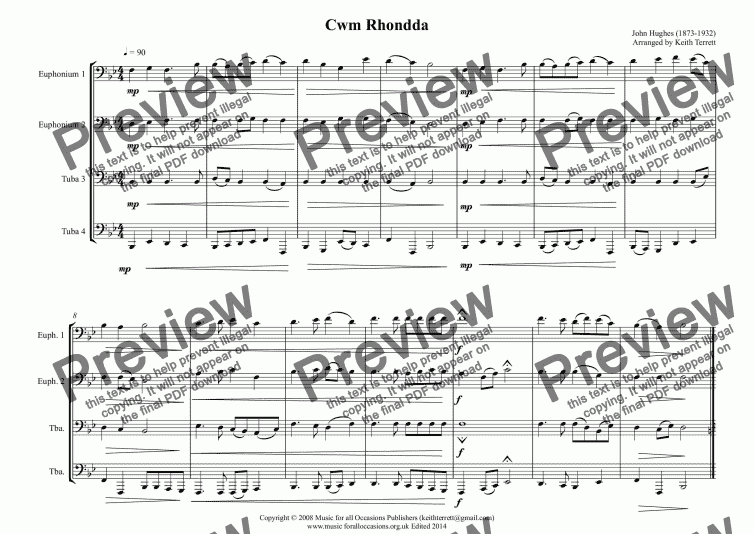 Composer
John Hughes (1873-1932) Arranged by Keith Terrett
Arranger
Keith Terrett
Publisher
Music for all Occasions
Difficulty
Moderate (Grades 4-6)
Duration
1 minute
Genre
Classical music
License details
For anything not permitted by the above licence then you should contact the publisher first to obtain permission.

An arrangement of Cwm Rhondda for Tuba Quartet.

Cwm Rhondda, taken from the Welsh name for the Rhondda Valley, is a popular hymn tune written by John Hughes (1873–1932).

It is usually used in English as a setting for William Williams’s text Guide Me, O Thou Great Jehovah (or, in some traditions, Guide Me, O Thou Great Redeemer),[1] originally Arglwydd, arwain trwy’r anialwch in Welsh. On account of a line in this English translation, the tune (and hymn) is often called Bread of Heaven.

John Hughes (22 November 1873 – 14 May 1932) was born in Dowlais and brought up in Llanilltud Faerdref (in English: Llantwit Fardre). At age 12 he began work in Glynn Colliery in his home town and subsequently became a clerk at the Great Western Colliery Pontypridd where he worked for over 40 years. He served as a deacon and leader of the congregational singing in Salem Baptist Chapel Llanilltud Faerdref.[2][3] The first version of the tune, called "Rhondda" was written in 1905 for the Cymanfa Ganu (hymn festival) in Pontypridd, when the enthusiasm of the 1904–1905 Welsh Revival still remained.[4] The present form was developed for the inauguration of the organ at Capel Rhondda, in Hopkinstown in the Rhondda valley, in 1907.[5] Hughes himself played the organ at this performance, using the English translation of William Williams’s words because of the large number of English-speaking industrial workers who had immigrated to the area.[6] A number of his other compositions were popular during his lifetime, but have not lasted. The name was changed from "Rhondda" to "Cwm Rhondda" by Harry Evans, of Dowlais, to avoid confusion with another tune by M O Jones.

History[edit] William Williams Pantycelyn (named, in the Welsh style, ’Pantycelyn’ after the farm which his wife inherited) is generally acknowledged as the greatest Welsh hymnwriter.[9] The Welsh original of this hymn was first published as Hymn 10 in Mor o Wydr (Sea of Glass) in 1762. It comprised six verses.[10] (References to a five verse version in Pantycelyn’s Alleluia of 1745[11] appear to be incorrect.) It was originally titled Gweddi am Nerth i fyned trwy anialwch y Byd (Prayer for strength for the journey through the world’s wilderness).

Peter Williams (1722-1796, no relation of the author but well known for his popular edition of the Welsh Bible, with notes.[12][13]) translated part of the hymn into the English version given above, with the title Prayer for Strength. It was published in Hymns on various subjects, 1771. This translation is the only Welsh hymn to have gained widespread circulation in the English-speaking world.[14] The present-day Welsh version, given above, is essentially a redaction of the original to parallel Peter Williams’s English version. A result of the translation process is that the defining phrase Bread of heaven does not actually occur in the original (where the Welsh would be Bara nefoedd; it is a paraphrase of the references to manna.

The Welsh word Arglwydd corresponds more-or-less to the English Lord, in all its senses. It is used in the Old Testament to represent the Divine Name (the tetragrammaton) and in the New as the standard honorific for Jesus Christ. Accordingly Peter Williams translated it as Jehovah in accord with the practice of his time. Many English-language hymnals today translate it as Redeemer.

The following version of the original is taken from Gwaith Pantycelyn (The Works of Pantycelyn). All but the second verse is given, with minor variations, in the Welsh Hymnbook of the Calvinist and Wesleyan Methodists, published by the assemblies of the two churches.