By: John Hughes (1873-1932) Arranged by Keith Terrett
For: Trio of Oboes
This music is in your basket
View basket
Loading... 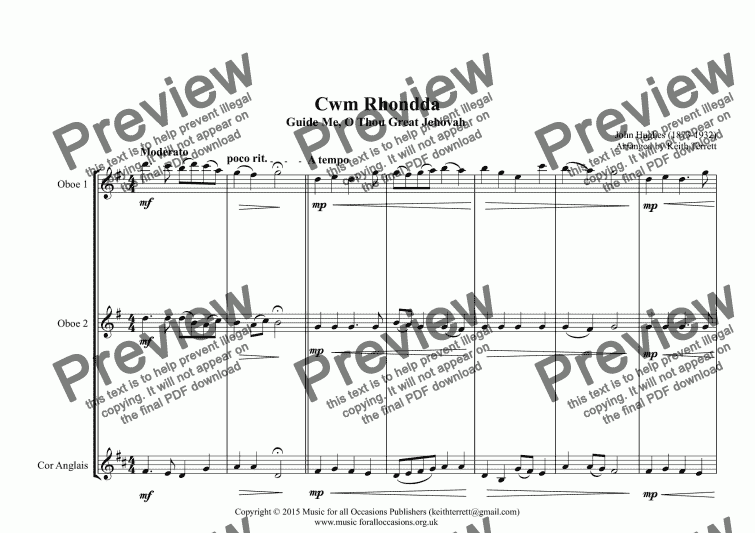 Composer
John Hughes (1873-1932) Arranged by Keith Terrett
Arranger
Keith Terrett
Publisher
Music for all Occasions
Difficulty
Moderate (Grades 4-6)
Duration
1 minute
Genre
Classical music
License details
For anything not permitted by the above licence then you should contact the publisher first to obtain permission.

An arrangement of Cwm Rhondda for a trio of Oboes & English Horn.

Cwm Rhondda, taken from the Welsh name for the Rhondda Valley, is a popular hymn tune written by John Hughes.

It is usually used in English as a setting for William Williams’ text Guide Me, O Thou Great Jehovah (or, in some traditions, Guide Me, O Thou Great Redeemer),originally Arglwydd, arwain trwy’r anialwch in Welsh. On account of a line in this English translation, the tune (and hymn) is often called Bread of Heaven.

John Hughes wrote the first version of the tune, which he called "Rhondda", in 1905 for the Cymanfa Ganu (hymn festival) in Pontypridd, when the enthusiasm of the 1904–1905 Welsh Revival still remained. The present form was developed for the inauguration of the organ at Capel Rhondda, in Hopkinstown in the Rhondda valley, in 1907. Hughes himself played the organ at this performance, using the English translation of William Williams’s words because of the large number of English-speaking industrial workers who had immigrated to the area. The name was changed from "Rhondda" to "Cwm Rhondda" by Harry Evans, of Dowlais, to avoid confusion with another tune by M O Jones.