By: Composed by Ramón Carnicer Battle October (1789 –1855) Arranged by Keith Terrett
For: Brass quintet
This music is in your basket
View basket
Loading... 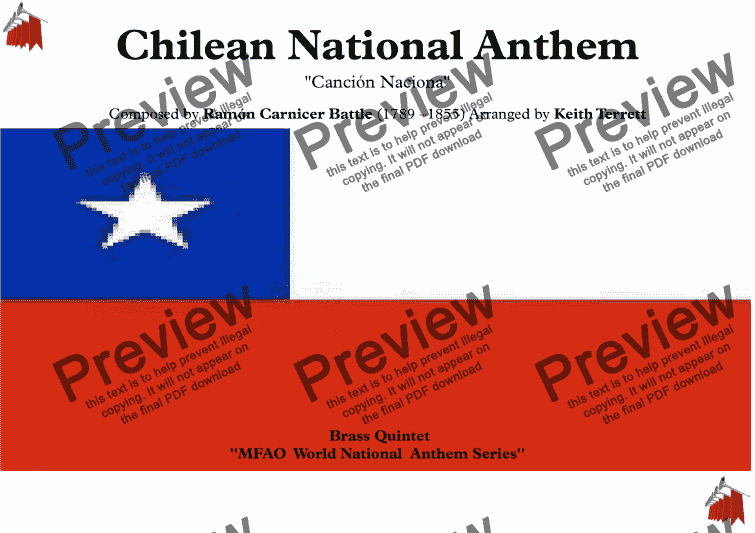 Composer
Composed by Ramón Carnicer Battle October (1789 –1855) Arranged by Keith Terrett
Arranger
Keith Terrett
Year of arrangement
2015
Publisher
Music for all Occasions
Difficulty
Moderate (Grades 4-6)
Duration
2 minutes
Genre
World music
License details
For anything not permitted by the above licence then you should contact the publisher first to obtain permission.

An arrangement of the Chilean national anthem for Classical Brass Quintet.

The National Anthem of Chile (Spanish: Himno Nacional de Chile) is also known as Canción Nacional (National Song). It has a history of two lyrics and two melodies that made up three different versions. The current version was composed by Ramón Carnicer, with words by Eusebio Lillo, and has six parts plus the chorus.

The first Chilean National Anthem dates back to 1819, when the government called for, on the 19th of July, the creation of music and lyrics for this purpose.

The composer Manuel Robles and the poet Bernardo de Vera y Pintado fulfilled this mandate and their "National Song" debuted on 20 August 1820 in the Domingo Arteaga theater, although other historians claim that it was played and sung during the festivities of September 1819.

In the beginning, everyone would stand for the song. O’Higgins and Freire listened to it with respect and full of emotion, for they had marched to victory to its tune more than once.

The custom of always singing it at the theater slowly disappeared, until it was ordered that it only be sung at the anniversary of the country.

The doctor Bernardo Vera, known in the history of the independence, was the author of the verses that were sung to Robles’ music.

This first hymn was sung until 1828 when it was replaced with what is sung today.

The second Chilean National Anthem was composed by the Spanish composer Ramón Carnicer, when he was exiled in England because of his liberal ideas. Mariano Egaña, Chilean Minister in London, acting on the criticism that Robles’ song was receiving, asked Carnicer to compose a new hymn with Bernardo de Vera’s original text.

The Spanish musician probably wrote the work by 1827, the date he returned to Barcelona, and his hymn debuted in Santiago, in the Arteaga theater, 23 December 1828.

Years later, in 1847, the Chilean government entrusted the young poet Eusebio Lillo with a new text that would replace the anti-Spain poem of Vera y Pintado, and after being analyzed by Andrés Bello, retained the original chorus ("Dulce patria, recibe los votos…"). The lyrics were slightly revised in 1909.

During the military government (1973–1990) of Augusto Pinochet, the Verse III was officially incorporated because of his praise of the armed forces and the national police (Carabiners). After that, in 1990, it was eliminated from the anthem and only sung in military events as part of the full song. Supporters from the former military regime also sing the anthem with the Verse III in private ceremonies and rallies.

In the celebrations marking the return of democracy in March 1990 at Santiago’s Estadio Nacional Julio Martínez Prádanos, the anthem was played in its present melody, raised to F Major (the Royal Musical Official Version of the anthem) which is the original melody of the second anthem by Carnicer, but using the 1847 lyrics as text, save for the original chorus of the 1819 anthem. This was the version that from 1991 to 2013 was played during sign-on and sign-off broadcasts of Chilean television stations. Now the anthem is played in C Major during sign-on and sign-off.

Joe Walsh, famed musician who was part of the United States rock band the Eagles, sang the National Anthem of Chile at a Los Angeles Angels of Anaheim baseball game in 2003.

Ramon Carnicer i Batlle (October 24, 1789 – March 17, 1855)[1] was a Catalan composer and opera conductor, today best known for composing the National Anthem of Chile.

Carnicer was born in Tàrrega, Catalonia (Spain). His first major positions were as conductor for the opera, and he was influential in the development of the Spanish national opera style, zarzuela. He conducted the Italian Opera in Barcelona from 1818 to 1820, and the Royal Opera in Madrid from 1828 to 1830, as well as composing nine operas.

In 1830, he accepted a position as professor of composition at the Madrid Conservatory, which he would retain until his retirement in 1854. He composed a variety of songs, church music, and symphonies; his best-remembered composition today being the National Anthem of Chile. He died in Madrid in 1855.