By: Sebastina de Yvradier (1809–1865) arr. Thomas H. Graf
For: Clarinet choir
This music is in your basket
View basket
Loading... 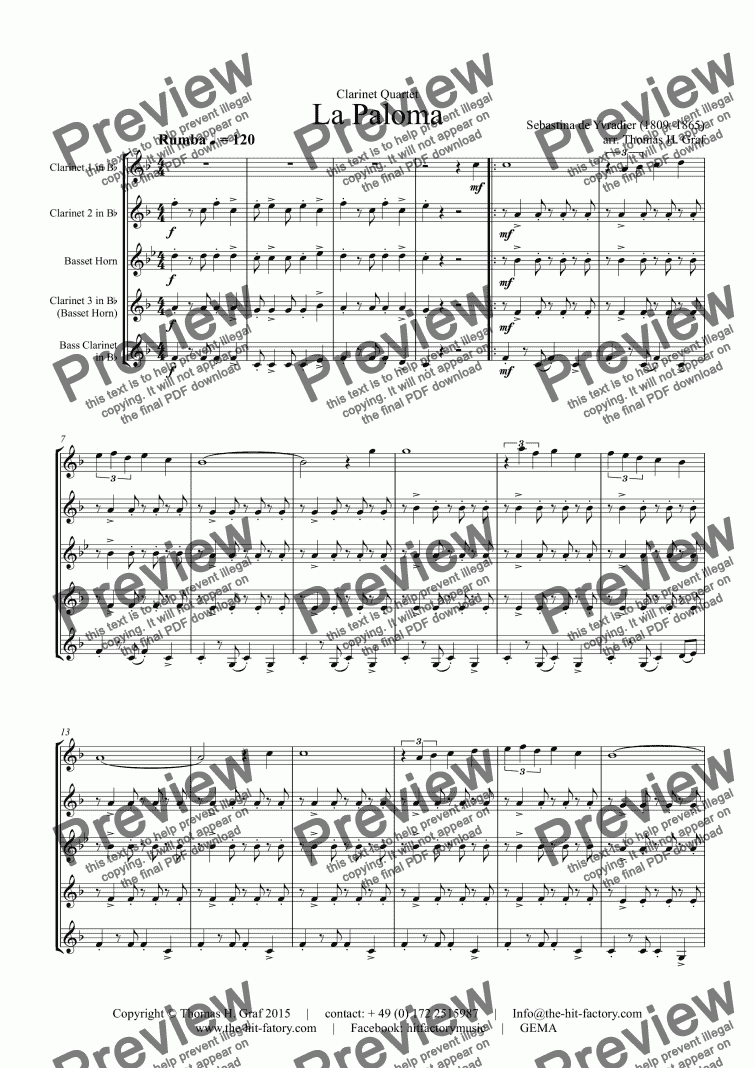 La Paloma" is a popular Spanish song that has been produced and reinterpreted in diverse cultures, settings, arrangements, and recordings over the last 140 years. The song was composed and written by the Spanish composer from the Basque region Sebastián Iradier (later Yradier) after he visited Cuba in 1861. Iradier may have composed "La Paloma" around 1863, just two years before he died in Spain in obscurity, never to learn how popular his song would become. "La Paloma" belongs to a genre of songs called "Habaneras," a musical style developed in 19th-century Spain that is still today very much present in the form of folk songs and formal compositions, particularly in the Northern Basque Region and East Coast (Catalonia and Valencia) regions of the country. Like all "Habaneras," its characteristic and distinct rhythm reflects the fusion of the local Cuban songs that the Spanish sailors of the time brought back with them from their travels to the island, with the rhythm structure of the flamenco “tanguillo gaditano” (original from Cádiz, Andalusia). Very quickly "La Paloma" became popular outside of Spain, particularly in Mexico, and soon spread around the world. In many places, including Afghanistan, Hawaii, the Philippines, Germany, Romania, Zanzibar, and Goa it gained the status of a quasi-folk song. Over the years the popularity of "La Paloma" has surged and receded periodically, but never subsided. It may be considered one of the first universal popular hits and has appealed to artists of diverse musical backgrounds.[1] There are more than one thousand versions of this song, and that together with "Yesterday" by the Beatles, is one of the most recorded songs in the history of music.

Any individual arrangement and Substitute parts is available on request. Call +49 (0) 172 2515987 Important note: Some of the music might be revised – do not hesitate to contact us to get the latest version of the song you have purchased.

Check out our other compositions and arrangements!

Sorry, there's no reviews of this score yet. Please .
In order to submit this score to ScoreExchange.com Thomas Graf has declared that they own the copyright to this work in its entirety or that they have been granted permission from the copyright holder to use their work. If you believe that this score should be not available here because it infringes your or someone elses copyright, please report this score using the copyright abuse form.