By: John Stafford Smith
For: Voice + keyboard
This music is in your basket
View basket
Loading... 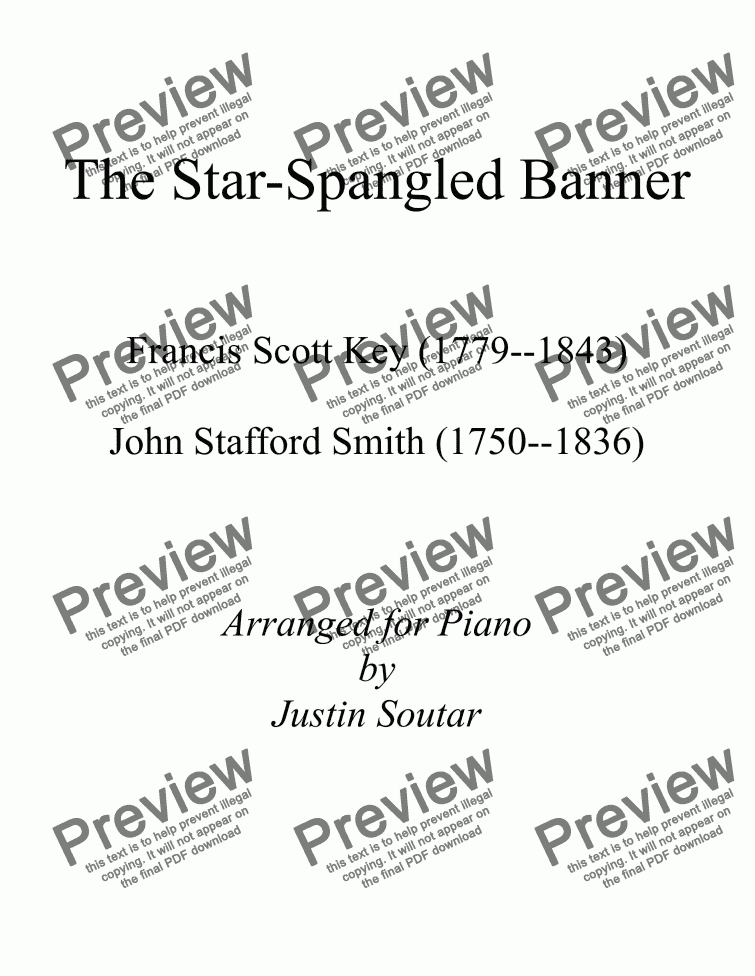 Composer
John Stafford Smith
Year of composition
1814
Arranger
Justin Soutar
Year of arrangement
2015
Lyricist
Francis Scott Key
Difficulty
Moderate (Grades 4-6)
Duration
7 minutes
Genre
Other and Classical music
License details
For anything not permitted by the above licence then you should contact the publisher first to obtain permission.

Here is a brand-new and hopefully original piano arrangement of the United States of America's famous national anthem, "The Star-Spangled Banner," which was originally written two hundred years ago. The stirring melody was crafted by a very capable British composer, while the haunting and triumphant lyrics, based on true historical events, flowed from the pen of a young amateur American poet. The result was a timeless musical classic–a majestic and magnificent patriotic hymn of enduring popularity that offers a fitting tribute to the greatness of the American spirit.

Numerous arrangements, performances, and recordings of this great hymn have been made by a wide variety of musicians over the course of many years. For about five or six years now, I've been wanting to attempt my own arrangement of this beautiful song. My goal here was to create a unique, reverent, restrained, and melodic arrangement that effectively conveyed the beauty and majesty of the original piece without rendering it overly difficult to play. Unlike some rousing military-style orchestral arrangements, this one is deliberately a bit slower, softer and more poetic overall; there are plenty of ritenutos and tenutos and not too many accent marks, while marcatos are absent altogether. (Do watch out for those occasional accent marks and staccato dots that are mixed in with the tenuto marks; some of the notes towards the end of the score feature all three of these.)

When performing this music, the pedaling indicated in the score should be followed with scrupulous care throughout in order to achieve the intended effect. Ditto for the tenuto, staccato, and accent marks and fermatas. And don't forget to slow down wherever you encounter a ritenuto. This score is not meant to be hurried through. It should take at least seven minutes to play, preferably seven and a half to eight. This arrangement includes chord names as well as all four verses of Key's famous lyrics.

May God continue to bless and protect the United States of America for many years to come.

Battle Hymn of the Republic

Reviews of The Star-Spangled Banner

Sorry, there's no reviews of this score yet. Please .
In order to submit this score to ScoreExchange.com Justin Soutar has declared that they own the copyright to this work in its entirety or that they have been granted permission from the copyright holder to use their work. If you believe that this score should be not available here because it infringes your or someone elses copyright, please report this score using the copyright abuse form.