By: Composed by Keith Terrett Lyric:s Keith Terett
For: Choir + orchestra
This music is in your basket
View basket
Loading... 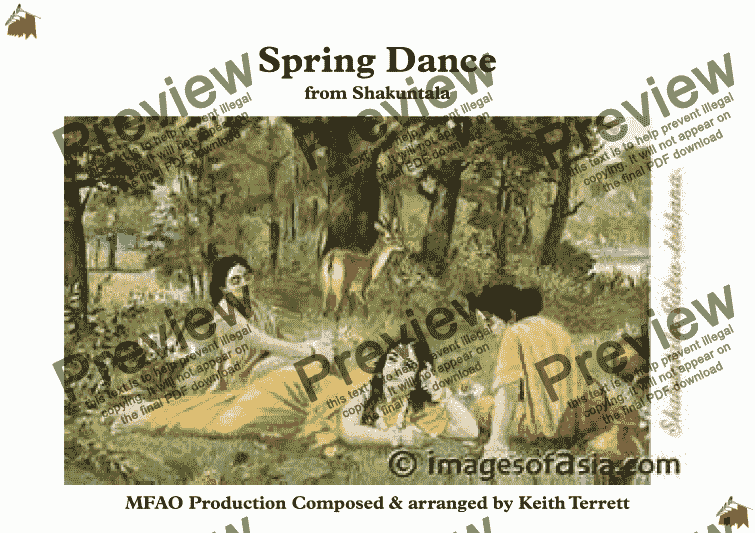 Composer
Composed by Keith Terrett Lyric:s Keith Terett
Arranger
Keith Terrett
Publisher
Music for all Occasions
Difficulty
Moderate (Grades 4-6)
Duration
2 minutes
Genre
World music
License details
For anything not permitted by the above licence then you should contact the publisher first to obtain permission.

One of six original songs composed for Shakuntala, for a performance at Pathways School Gurgaon Founder’s Day 2016.

King Dushyanta first encountered Shakuntala while travelling through the forest with his army. He was pursuing a male deer wounded by his weapon. Shakuntala and Dushyanta fell in love with each other and got married as per Gandharva marriage system. Before returning to his kingdom, Dushyanta gave his personal royal ring to Shakuntala as a symbol of his promise to return and bring her to his palace.

Shakuntala spent much time dreaming of her new husband and was often distracted by her daydreams. One day, a powerful rishi, Durvasa, came to the ashrama but, lost in her thoughts about Dushyanta, Shakuntala failed to greet him properly. Incensed by this slight, the rishi cursed Shakuntala, saying that the person she was dreaming of would forget about her altogether. As he departed in a rage, one of Shakuntala's friends quickly explained to him the reason for her friend's distraction. The rishi, realizing that his extreme wrath was not warranted, modified his curse saying that the person who had forgotten Shakuntala would remember everything again if she showed him a personal token that had been given to her.

Time passed, and Shakuntala, wondering why Dushyanta did not return for her, finally set out for the capital city with her foster father and some of her companions. On the way, they had to cross a river by a canoe ferry and, seduced by the deep blue waters of the river, Shakuntala ran her fingers through the water. Her ring (Dushyanta's ring) slipped off her finger without her realizing it.[citation needed]

Arriving at Dushyanta's court, Shakuntala was hurt and surprised when her husband did not recognize her, nor recollected anything about her. She tried to remind him that she was his wife but without the ring, Dushyanta did not recognize her. Humiliated, she returned to the forests and, collecting her son, settled in a wild part of the forest by herself. Here she spent her days while Bharata, her son, grew older. Surrounded only by wild animals, Bharata grew to be a strong youth and made a sport of opening the mouths of tigers and lions and counting their teeth.

Meanwhile, a fisherman was surprised to find a royal ring in the belly of a fish he had caught. Recognizing the royal seal, he took the ring to the palace and, upon seeing his ring, Dushyanta's memories of his lovely bride came rushing back to him. He immediately set out to find her and, arriving at her father's ashram, discovered that she was no longer there. He continued deeper into the forest to find his wife and came upon a surprising scene in the forest: a young boy had pried open the mouth of a lion and was busy counting its teeth. The king greeted the boy, amazed by his boldness and strength, and asked his name. He was surprised when the boy answered that he was Bharata, the son of King Dushyanta. The boy took him to Shakuntala, and thus the family was reunited.