By: Composed by Sam Williams & Alton Augustus Adams Arranged by Keith Terrett
For: Brass quintet
This music is in your basket
View basket
Loading... 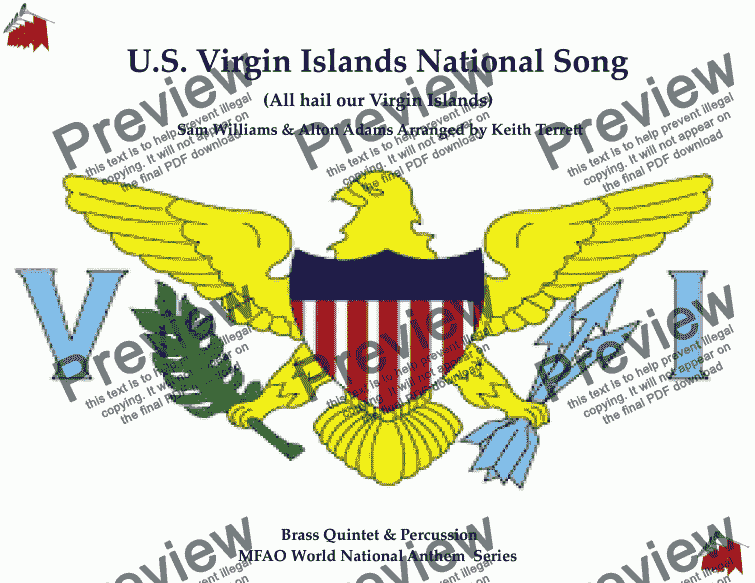 Composer
Composed by Sam Williams & Alton Augustus Adams Arranged by Keith Terrett
Arranger
Keith Terrett
Publisher
Music for all Occasions
Difficulty
Moderate (Grades 4-6)
Duration
3 minutes
Genre
World music
License details
For anything not permitted by the above licence then you should contact the publisher first to obtain permission.

The song was composed by Sam Williams and U.S. Virgin Island native Alton Adams in the 1920s. It served as the unofficial anthem of the U.S. Virgin Islands until 1963 when it was officially recognized by Legislative Act.[citation needed] The song itself consists of a very cheerful melody.[original research?]

Since the U.S. Virgin Islands is an American insular territory, the national anthem is still The Star-Spangled Banner.

The Guardian reporter Alex Marshall compared this anthem favourably to other national anthems, suggesting that it was reminiscent of the music of the Disney film Mary Poppins.

(USA), or SOCAN (Canada), or APRA (Australia) or KODA (Denmark) or the equivalent organisation in your own country, giving the ﻿name of the arranger as Keith Terrett.